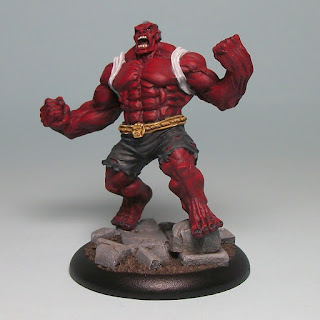 Amok is the 125th Pulp City mini I have painted for my collection, and it feels like something of a milestone to have done so - the 125th mini needed to be something big, and Amok certainly is big!

Painting Amok was mostly a nice switch of pace after painting some recent Grimm, contrasting in size especially. Amok is a member of The Way, and stands somewhere between 60-65 mm in height (he is mounted on a 50 mm base), so he is a big mini. Doing the flesh was nice and quick, but after that it felt slow to finish, even though I only started it last week; I forgot how hard work I find it to paint bigger models, even one with a simple scheme like Amok. In all, I have painted a fair number of models in the past couple of months over a few ranges, so it is nice to have a decent level of productivity.

One of the greatest benefits of last year's successful Kickstarter was being able to make Powerhouses for the main Factions that did not yet have them. Melvin de Voor did yet another brilliant job with the concept and James Van Schaik turned in a great sculpting job based on that IMHO. As soon as we all saw where Amok was heading we were very pleased! 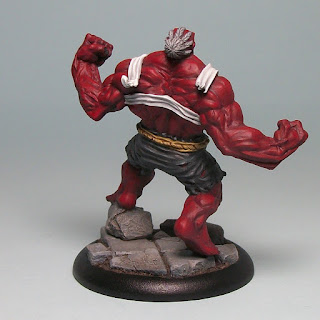 Amok's massive form is due to his physical body being infested by a spirit of rage. The peaceful man that he was seeks to contain that mystical anger-fuelled power, but it remains ever-present.

In game terms Amok is one of the strongest Powerhouses there is. He also has Dice+ at the lowest end of Powerhouses. However that is mitigated by accumulating Power Up dice and spending them well - if he adds 3 Power Up dice to an attack, he can add 2 more for free! Basically he is designed to be used more aggressively than most other Powerhouses. This is really emphasised by his Power Takedown and Throw combo; Power Takedown can generate a Grab & Throw EFX to allow Amok to use the Target as a missile, adding another Damage 1 to the Target of the Power Takedown as well as whatever Damage is caused to the Target of the Throw!