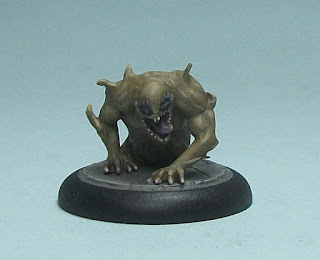 My first Pulp City mini of the year! Painting Grimmbiote was nice and quick which was pleasant after losing some momentum late in 2015. Gripped by some impetus I decided to see this through which took a little over an hour or so.

This is the second Grimmbiote I have painted, the first was my contribution to a minis exchange last year and was done in red and black to evoke the colours of a certain symbiote-villain. I eschewed the obvious colour scheme to go for something that would look 'right' (to me!) alongside the rest of my Grimm. It also meant I could make a head-start on a few other Grimm models at the same time. The recent Grimm focus has reason for a battle report game Rob and I have planned for later in the year.... 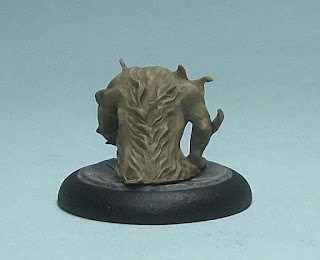 In game terms, Grimmbiote can be a surprising threat as far as Infiltrator's go: he has Rending Slash which has Damage 2 as its basic FX. He adds +1 die to Strength Actions. Ideally, leave Grimmbiote in Base to Base with terrain and use Grimmbiotic Webbing to Pull a Target model closer, benefiting from the bonus die from Wall-crawler, hitting them with Rending Slash in the same Activation!

A quick welcome to the blog post: welcome aboard Jan Ferris! Thanks for following and taking time to check things out.

On the hobby front, I have just finished my first Pulp City mini of the year and have a few others with their main skin colour blocked out, so I expect to get a few things done in the next few weeks.

Behind scenes for the Pulp Monsters team, we have been doing proof-reads for all the Cold War Kickstarter cards, we have allocated the first artists for some of the Cold War Supreme Genesis characters, and on the web-site we have started a weekly series of Spotlight articles (click for link).
Posted by pulpcitizen at 09:49 2 comments: 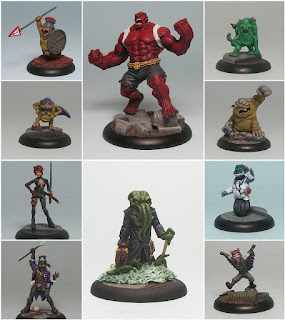 Another year over and a few more minis added to the collection!

I didn't paint as many Pulp City minis in 2015 as I hoped (I aimed for 12 and managed 10), but on the up-side I did add a couple of Leaders, another Powerhouse and a number of Grimm.

In 2016 I am setting the same goal, but I hope it will feel more achievable since in 2015 all of those minis were painted in the second half of the year.

2015 also saw the second Pulp City Kickstarter campaign, which was a very nice success, adding two new whole Factions to the range. If anyone has the belief that running a Kickstarter campaign is easy, I would say it is anything but, and that was with four of us contributing (well done to all of us - Maciej, Devon and Melvin).

So, time to look forward to the year ahead!
Posted by pulpcitizen at 03:53 6 comments: