Pictures by Rob. Terrain and minis by me (except Markers and Ape Thugs and Hired Guns by Rob). Gaming by the both of us! 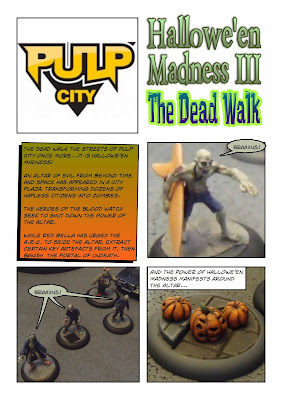 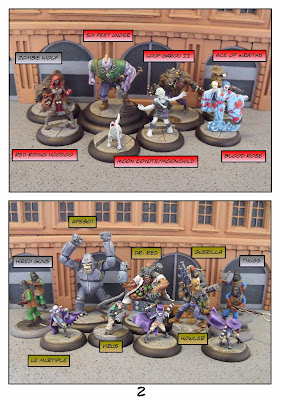 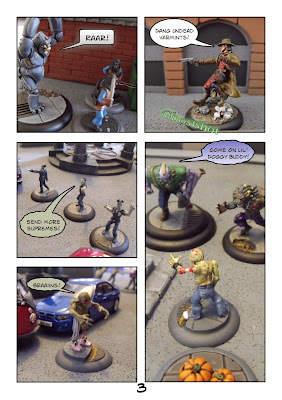 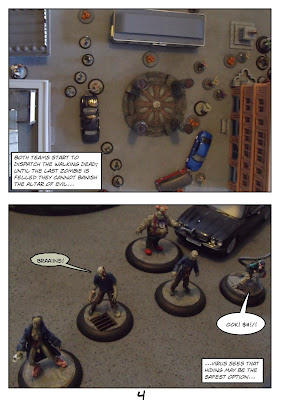 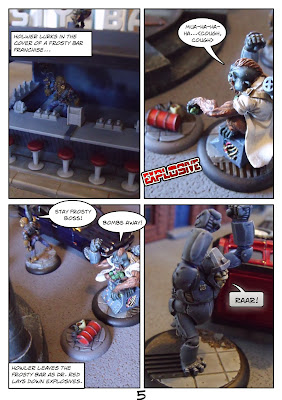 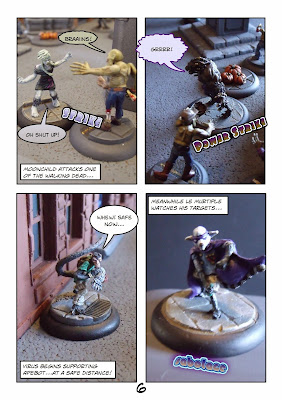 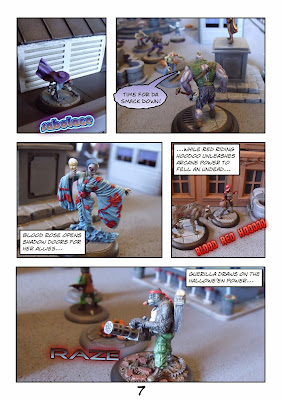 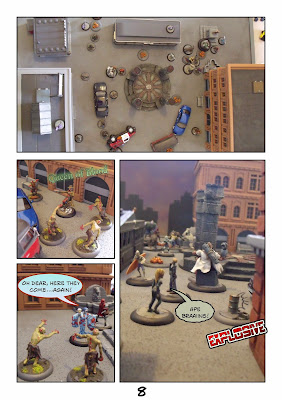 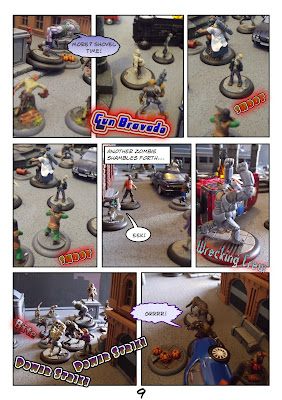 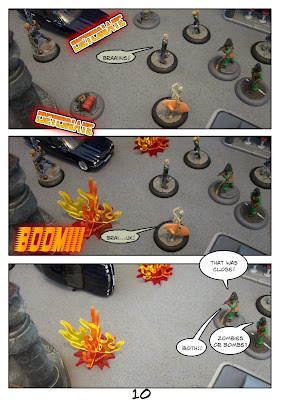 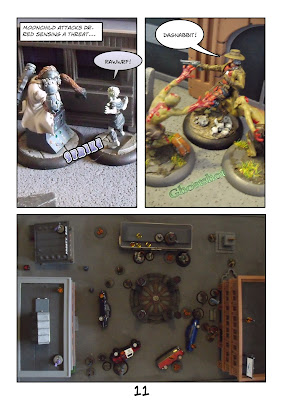 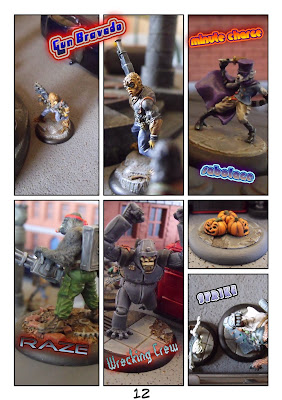 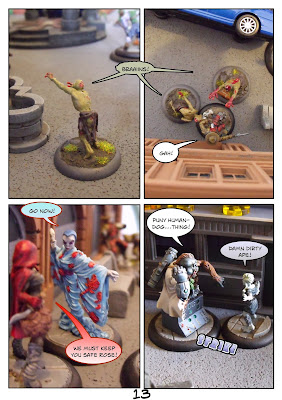 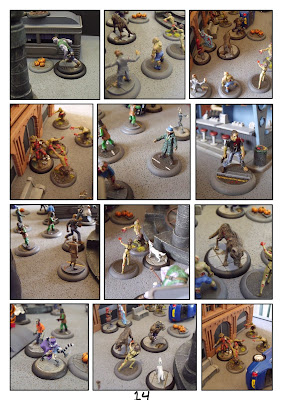 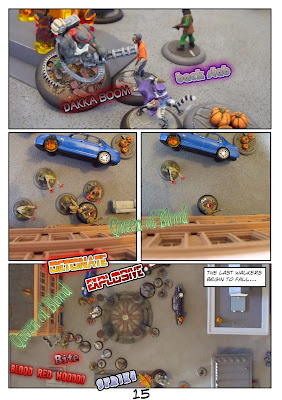 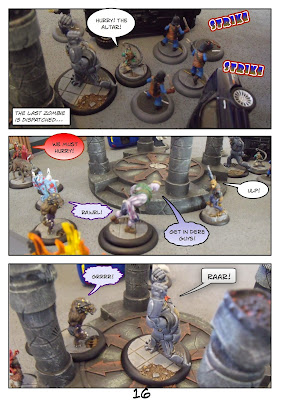 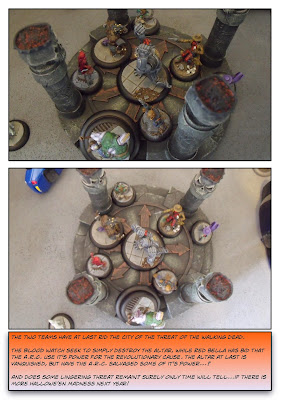 One of the new things we have added to Pulp City SE are Roles.

Roles are intended to work as a shorthand for players to indicate what kind of function a model has in-game, while also reflecting this through mechanics.

The eight Roles are:
Leader: Your boss model; capable of boosting the capability of the team, and of holding their own in a fight.
Powerhouse: The big guys; the hardest-hitting model in a team; they don't work well without the support of their Team to fuel their AP (Action Point) needs.
Brawlers: The base-to-base specialists; roll more dice against Targets in BtB.
Blasters: The range specialists; roll more dice against Targets at distance/outside of BtB.
Tanks: The tough guys; extra dice to Defend, and can take hits for Team-mates.
Support: Buffing and AP deliverers.
Speeders: The fastest models in the game; they can move more often than other models.
Infiltrators: They deploy almost anywhere on the board; these sneaky guys are useful for targeting weaker models in the back-line, and are fairly self-sufficient when it comes to AP.

So basically now it should be quicker to figure out the mix of models you want. Assuming most games are between 8 to 12 Levels, then that would probably be around 5-9 models, so most Teams might struggle to cover every Role, and therefore it is about finding a mix that suits your game-play. Not enough Support, and you may lack for AP. If you go all-Brawlers, Blasters, Tanks, and Powerhouse, then you may lack the AP you want to be effective.
Posted by pulpcitizen at 03:17 3 comments:

I plan to do a few brief articles ahead of the Kickstarter, outlining some key changes we have planned for Pulp City Supreme Edition.

One of the key things is we have tried to simplify the 'wall of text' that faced players when using the characters. To that end we have created 'Action Bars' that serve as a kind of gaming algebra or keyword recipe, but much easier to read than any kind of mathematics!

Basically the Action Bar says how an Action works, and what happens if it succeeds, breaking things down into key words. Some examples:
Damage 1 reduces the HP of the Target by 1
Knockback 4 moves the Target 4 inches directly away from the Attacker
Stun causes the Target to have the Stunned Condition

So Actions and outcomes of Actions are simplified. We have also largely attempted to do the same with Powers. A few were always going to be wordy, but we have tried to make each Power useful and mostly unique, while retaining a sense of flavour that suits the intended game-play of the character.

The upshot is that we have condensed gaming data down from two card sides to one (the other side now serving as your Recruitment or Team-building data). There is also no need to refer to a long list of Skills; the relevant features are folded into Attribute values, Movement Type, Actions and Powers.

Posted by pulpcitizen at 03:17 No comments:

Just a quick note to say that I had noticed for a while the blog seemed to load slower than my other blogs. Therefore I decided to rationalize a few defunct labels and remove a couple of gadgets.

As a result the blog seems to be loading at the speed I expect, so I am now happy. It may mean some 'dead' internal links have resulted, so if you notice any, feel free to comment and I will fix them accordingly.
Posted by pulpcitizen at 00:08 No comments: 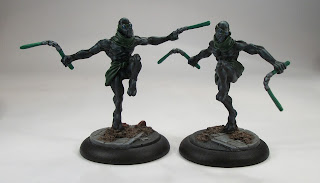 My third Minion Card of Ninjas for Jade Cult, and my 7th and 8th Ninjas so far.

These were supposed to be finished back in August for the Minion Month Painting Challenge I had with Rob, but I fell at the final hurdle. While painting various Zombies for Zomtober on one of my other blogs (click for link), I finally regained the motivation to get these finished.

So these are done, which is a 'good thing' as far as I am concerned. I have now painted 116 minis for Pulp City, which I find pretty pleasing. 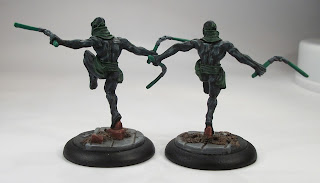 I still have plenty of Pulp City minis to paint, and hope to get stuck into them over the next few months: Green Serpent; Pulp Monster; 3 x Terror Cotta Warrior; Slug Muldoon; Papa Zombie; Comte Vendredi; and some other stuff...so watch this space!

Finally, yes, I did manage to catch the base of the lamp in the picture of the backs of the minis; oh well, I am too preoccupied to take any replacement pics...I have painting to do!
Posted by pulpcitizen at 03:51 3 comments:

Okay, I said in my last post that the 'next post' would be some Ninjas, but I will add a new caveat that 'welcomes' always trump any such plans!

So hot on the heels of the last welcome post comes this one, going to Jon Shields. As always it is greatly appreciated. So thank you guys.

Just as a quick side note; I used to be able to check out other people's blogs by licking on their Follower icon, but I think this may not always be the case. So to anyone Following, please feel free to let me know if you have a blog so I can do the same in return.

In the mean-time, once again thanks to Jon.
Posted by pulpcitizen at 11:32 2 comments:

A new 'welcome to the Pulp Citizen' post, this one going to Raspoutine - thanks very much for signing up. I really do appreciate each person who signs up or stops by - it helps motivate me to blog, so thanks to Raspoutine and everyone taking time to read the blog.

I know things have been a little quiet around here at times, but that has partly been due to development of the new Supreme Edition, so I should start blogging stuff about that and increase my activity - so that is going to be the plan going forward!

The next post will be some more newly painted Ninjas - I am growing a small horde of them now...
Posted by pulpcitizen at 09:19 1 comment:

After almost two years of work (twenty two months by my reckoning), we are now very close to launching the Pulp City SE Kickstarter!

Those who are familiar with the Pulp City Facebook page or the Citizens of Pulp City Facebook group may already be aware of the news, but I thought ahead of the launch I would post some news for those that do not yet know that it is coming.

Pulp Monsters is only a very small company founded by Maciej, ably assisted by Melvin, Devon and myself; it is a labour of love to the hobby and is not some all-conquering gaming monolith of a business. Moving and evolving the game is a big undertaking, which is why we have decided that a Kickstarter is the best fit to do that. What we have in mind is to draw upon everything learned in the past six years to make the best game that we feel we can. If the Kickstarter succeeds we will do just that!

If we exceed our target we can fill some gaps in the minis line quite quickly to cut down on the wait that fans of some Factions have for the 'big guy' Powerhouse models, as well as finally unleashing the Grimm as a Faction in their own right.

Our initial target goal will I believe be modest enough to achieve success, while we are confident that if it is met, we can produce a brand-spanking new hardback book, as well as updating the game cards for every existing Supreme and Minion to meet the evolved rules.

Over the next few days I plan to give further details, a lot of which have been on the Facebook page but recognizing that not everyone uses that social network.
Posted by pulpcitizen at 00:03 No comments: