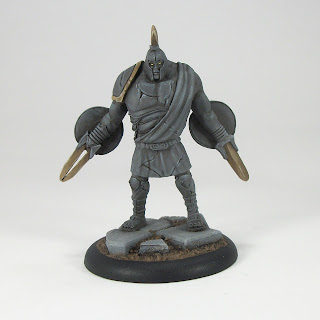 Phalanx is my third Pulp City Supreme this month (yay!), and finishing him means I have hit my planned goal for the year (more yay!) with a few months to go. Painting Phalanx also takes me to 142 painted Pulp City minis, which leaves me just 8 more short of the next milestone achievement of 150 painted minis from the range. I will probably have to commit to a big picture of them all when I get to that stage (I did something similar when I went past 100 a few years back).

Phalanx is a member of the Forgotten, forged by Hellsmith to lead the Mecha Spartans. If his body is ever destroyed, he is reborn into a Mecha Spartan shell, transforming it into his traditional form.

In game terms Phalanx is a typical Forgotten, on a 40 mm base as most of them are. He is tough and hard-hitting despite being a Support Supreme, and with cheap (Level 1) Mecha Spartans around, you can keep him in the game a long time. 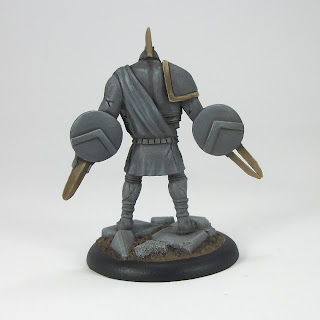 I cleaned up and prepared Phalanx at the same time as Cro Mag. The painting on this one was super quick by my standards, started and finished on the same day, with a simple palette and use of washes, a bit of dry-brushing and simple highlights. That said, I am pretty pleased with how he turned out despite the fast turnaround. Not sure what my next Pulp City painting will be, although I want to get TINY! and Grimmsham done as soon as I can, and maybe White Tiger and 100 Voices too. If I get 3 more minis painted fro the range before the end of the year, then I will have exceeded my 2014 and 2015 combined output.