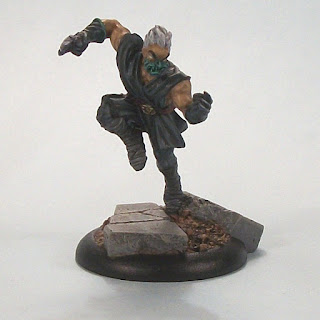 Chronin still keeps the Shadow Mask’s finely crafted blade. She is fully aware that in the Green Emperor’s court, there is always a Shadow Mask and one day, he or she will come to reclaim the sword along with Yuriko’s life. But she will be more than ready.

In the background of Pulp City there have been many Shadow Mask's, personal agents of the fearsome Green Emperor. The fledgling Hero called Chronin dispatched a previous Shadow Mask, and now another has arisen to take on the mantle. yet this one is possibly deadlier and certainly more feral than his predecessor.

My painting has been slowed by a combination of working night shifts (never conducive to my painting it seems) and engaging in bits of writing and development work. So even though this is not the best paint-job I have done, I am still quietly pleased that it is finished. I have decided that I will try and include at least a flash of the same green colour across all the Jade Cult that I do, and I may go for a 'black and green' scheme for the whole Team to help tie them together. I have a Ninja Sensei coming up soon that will hopefully help firm up that idea. 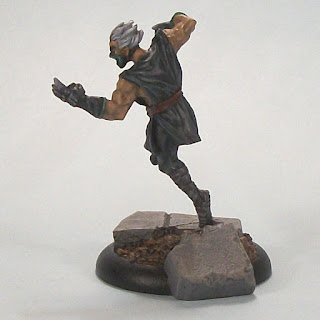 In game play Shadow Mask is all about sneaking up on enemy models then bringing some brutal attacks to bear. I need to probably pick up another so I can do a Shadow Double (one of his Exclusive Actions which allows a second self to appear; the double is likely just going to be a dark grey mini with basic highlights).
Posted by pulpcitizen at 11:51 4 comments:

Posted by Ron Purvis, I thought I would repost some of them with his agreement.

Posted by pulpcitizen at 11:10 No comments:

Maciej Żylewicz Interview On Tales of a Tabletop Skirmisher

My mate Hendybadger has posted an interview with Maciej (the main man behind Pulp Monsters as a company, and therefore the Pulp City game) over on his Tales of a Tabletop Skirmisher blog.

The interview can be found here, and amid the great questions and answers are some hints for future developments; so well worth a look.

On my own front, well nights have played havoc with my painting, but I am almost done with Shadow Mask (I hope!) so expect him soon. I also hope to get in a couple of very important and special play-test games soon.
Posted by pulpcitizen at 01:04 3 comments: