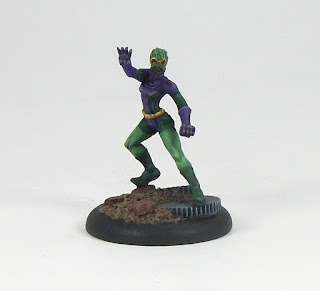 I started painting Anansi late last year, possibly around October or even earlier, and the mini sat part-painted for ages with main colours blocked out, but unfinished as the colour scheme didn't quite work - even though I had largely opted for my go-to Villain colour combo of green and purple (hey, it served Marvel well in the 1960's!). I made a very minor change on that and was able to complete it in an hour or two today, which was very pleasing. Not my best painting I will admit, but there are parts I am pretty happy with.

Anansi is the 139th Pulp City mini I have painted for my own collection, and puts me to 9 for the year, so I am well on course for my target. She is the first non-Grimm Supreme I have painted since Mr. Kraken back in December, so hopefully that can be addressed in the coming months! 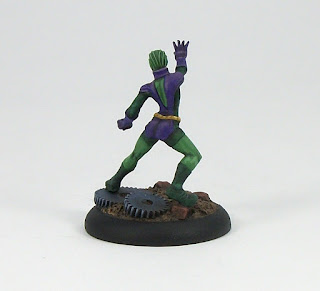 Transformed into a Supreme by a mysterious force, Anansi is a one time petty thief later turned circus performer. She later came to Mysterious Man's attention, who used his outlandish science to add to her array of gifts.

In game terms, Anansi is a Level 2 Infiltrator who can cause a lot of disruption on flanks with a Pulse that Shifts models. He Powers give her boosted defensive capabilities and she gets a steady stream of Power Up dice through the game. As a Level 2 model, she has inherent durability that Level 1 Infiltrators lack. The important thing is to keep her in Base to Base with terrain to benefit from High Ground as much as possibly (which helps offensively and defensively). Anansi is not going to win a toe to to battle against Level 2 Brawlers, Tanks or Powerhouses, but she is more than capable of picking other models off or weakening them, so is ideal against level 1 Supports, Infiltrators and Speeders. 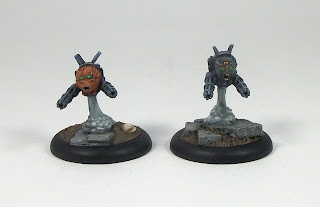 My focus this year on painting up as many unfinished Minions as possible continues, and the Hovercats are the latest minis I have completed for my Pulp City collection. A brilliant translation of Melvin's fantastic idea for these flying ferocious felines, they are, naturally, armed with Catling Cannons as they deliver a heck of a punch.

With Flying, their Blaster bonus, and if both Hovercats from a card shoot at the same model, they can each throw out 4 dice. With only 2 HP each and low to mid-range defensive Traits, they are fragile (although Flight adds the High Ground Combat Bonus), but if used smartly against the right kind of target (ideally with Agility no greater than 4), they can deliver a decent threat. 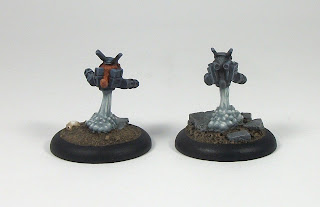 Finishing these little guys puts me up to around 15-17 Levels of Hero/Villain Minions, so a lot of choice on top of other things like Vigilantes, Grimminions, Necro G.I.'s etc.. I hope to add Robo-Chimp, Mutant Mobsters and/or Ankle Biters before the end of the year. Painting-wise I have to finish at least 4 more Pulp City minis to hit my minimum target of 12 for the year, which I feel I am on course for, maybe more if I can keep my sporadic momentum.