A big welcome to Monty, proprietor of Monty's War Gaming blog (here) who has signed on. Yet another gamer with apparently eclectic tastes; makes me consider if that is the norm rather than the exception.

I really appreciate Monty and everyone else following the blog, so a big cheers as ever to you all.

On another note, some 'discussion stuff' tied me up, as did some 'writing stuff' the other day, so I had hoped to photograph the recently finished Stalker (my second version) and Ra'Leigh, Aquarius Warlord, but that will have to wait a couple of days or so.
Posted by pulpcitizen at 14:31 No comments:

Not by me, but over here on this site - Tales of a Broken Gamer (link).

Short and succinct, but some clues for the future in here. :)
Posted by pulpcitizen at 14:28 1 comment: 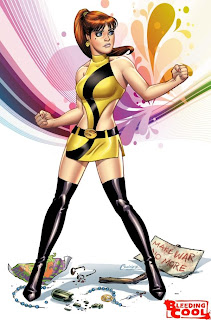 Rich Johnston on Bleeding Cool has been speculating about what seems like possible prequels to the legendary Watchmen series.

I don't use the term legendary lightly as the collected story has been heaped with praise over the years and critically considered within a wider milieu of modern prose.

It appears that Alan Moore will have nothing to do with this, although Dave gibbons may well be involved.

I found these images on the net and thought I would share them.

It looks like a few different artists could be working on these books, judging by the fact that Andy Kubert and Joe Kubert were responsible for one picture (Nite Owl), JG Jones another (Comedian), Amanda Connor another (Silk Spectre). 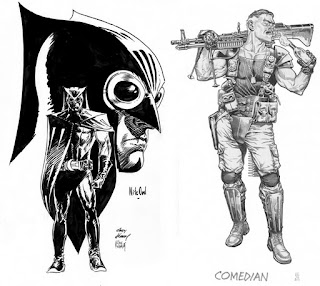 Assuming that these comic books do appear, I wonder if DC have some ultimate plan for the long-term, or simply aim to use them as another inevitably-hyped revenue stream. Could there be long-term publishing plans afoot, or just a splash event?
Posted by pulpcitizen at 05:21 2 comments:

Another 'welcome' post abounds, this one after Chris has signed up as a Follower. I have taken a look at Chris' own blog (link here to Chris's Gaming Journal) and it is immediately apparent that he is a tabletop gamer of eclectic tastes - in other words I will be watching to see what he posts next.

So thank you Chris for signing up - very much appreciated.

On the Pulp City painting front I have finished Ra'Leigh, Aquarius Warlord today, so hopefully new pictures sooner than later. It has been a long time coming, but it is finally done - whew!
Posted by pulpcitizen at 11:10 1 comment:

The dark side of Nature's fury is revealed with Dark Solar's Villainous equinox.

Like the Heroic version, this is not a strict Sub-faction per se, but does behave like one if you stick to the stipulations of Dark Solar's additional Team Power.

With some mutual restrictions (Ulthar versus Tritonious and Virgo), a Level 22 Team can still be put into the field.

Another 'welcome' post, this one going out to Denmark I believe - "thanks" for signing up as a Follower to Lord Siwoc. I note that Lord Siwoc has two of his own blogs, and they have been added to my watch list - one is called Brains and Guts - you can't go far wrong with a title like that! I look forwards to seeing what Lord Siwoc has in store for his blog going into the future.

So as ever, thanks to my new Follower and thanks to all who choose to stop by.
Posted by pulpcitizen at 12:41 2 comments: 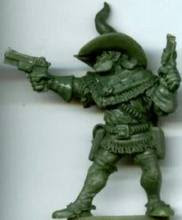 This Gunwitch mini was released by Green Ronin in 2003 and since getting into the Nocturnals comics last year, I am really eager to pick one of these up.
If anyone has one to trade or spots a listing for one, feel free to comment - I would be willing to pay a fair price in paypal or trade-bait.
And as for the Gunwitch? A zombie gun-slinger fighting for the forces of good in a modern horror-pulp comic? How cool is that!
Posted by pulpcitizen at 03:11 No comments:

Sentinels Of The Multiverse 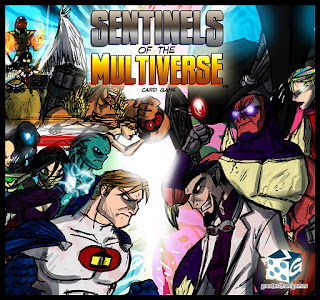 Not Pulp City related, but Sentinels Of The Multiverse is a fun supers-themed card game. As my Thursday night gaming group will be playing tonight, I thought I would post briefly about it.
The game is a co-operative card game (not a CCG, but a game with pre-built decks for the various heroic characters that are available), and in it players choose a villain to fight and a location to battle them in.
We lost one and won one in our first try (4 players) and tonight we will play with 5 players so it will be interesting to see if that skews the odds in the heroes favour, having more heroes to bring to bear.
We found the game fast and fun with decision-making offset by by the luck of the draw. While I am not a fan of co-operative games such as Arkham Horror and Castle Ravenloft for example (great visual design, but some unnecessary complexities - AH, and some seriously flawed and uncontrollable random results - CR), SotM pleasantly surprised me, but then I am an unabashed fan of super-heroes, so that is to be expected I guess. 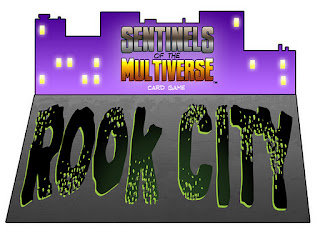 SotM has a supplement coming up called Rook City and I will certainly pick that up, enamoured as I am by SotM's game-play. It may not be quite as magical as Race for the Galaxy (a challenging yet brilliant game in my view), or have the elegance of a great 'German-style' board game (Power Grid being a favourite of mine), but it has been load of fun so far and I look fowards to playing more SotM games in the future. Highly recommended.
Posted by pulpcitizen at 07:15 2 comments:

A new 'welcome aboard' post - this time to Gigawatts, blogger of Teacher by Day, Wargamer by Night. Very kind to sign up to Pulp Citizen and Gigawatts can be assured I have reciprocated. In turn by following his blog I will get to see more stuff of interest that will pop up on the 'blogs I enjoy' list, which I find is one of the the cool things about blogging - that idea that someone showing interest in your blog leads you to theirs which in turn can offer interesting, useful or informative ideas and posts. So big thanks again to Gigawatts.
On painting news, I finished a new version of Stalker a few days ago, but work has meant insufficient time to photograph it yet. I have also done more work on the Aquarius Warlord so hope that will be done soon.
Posted by pulpcitizen at 11:19 4 comments: 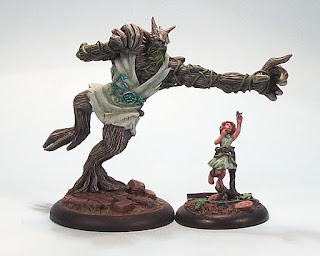 A definite duo from the outset, the winners of Supreme Genesis 1 were always intended to be at their best when used together.

As suggested by their creator: "Use Green Curtain to lock down enemies so Acorn can use her Hurray for the Trees power. This gives Father Oak even more damage potential when he charges in."

Following the Errata in the Guide that made Father Oak Immune/Hurray for the Trees, then it becomes even more of a destructive tactic.

Don't forget also that both are Immune to the restraining effects of Father Oak's Green Curtain Action.

Keep Acorn in Base to Base with dear old dad (a.k.a. Father Oak), and assuming she survuves an attack Father Oak can Strike back out of sequence. Of course this is not limited to Father Oak, but given his protection from Hurray for the Trees, then it is ideal to keep this pair close together.
Posted by pulpcitizen at 06:36 No comments:

Sometimes known as the Hooded Man, is he really the infamous Doctor Van Der Beek coming back from beyond the grave? Or just a guy that wants us to think so? Just to name several things that he might be involved in: Nuke, military facility raids, Quantum Holes to 1940’s, Kodo Island. That makes him a major player.

And of course crime is his game. Mysterious Man is, like Dark Solar and Dead-Eye, an unaligned Supreme. Like them he is a Level 3 who creates Sub-Faction type of Team when all of the Team lack a Sub-faction. Thta leaves him a good number of Villains to draw upon.. 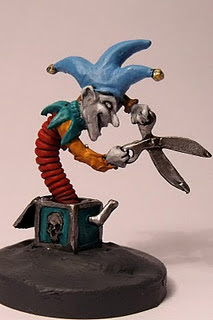 In answer to Shelldrake's question (and sorry for the delay!) they are by Reaper in a pack called 'Evil Toys'

From my mate Rob's blog: link. The picture is from Rob's blog (which is always worth checking out!).

Link to the Reaper pack listing.
Posted by pulpcitizen at 08:16 4 comments: