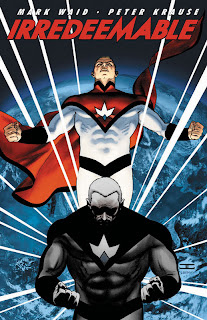 I started reading this only very recently, and is one of a growing number of series that I will be picking up in trade paperback (tpb) format (I also get Invincible in the hardcover collections that turn up fairly sporadically).

It is ironic, I think, that if I could read only one - just one - comic book each month, then it would not be a book like Irredeemable. That isn't a commentary on the quality of the book, but rather a reflection that I would prefer to read simpler, more action-orientated stuff that isn't awash with visceral violence, and some measure of shock value, something that is very much present in a lot of work I have enjoyed lately. I see a certain sense of nihilism in a lot of these works, something that I am not wholly comfortable with - which should be the point from the creator's perspective, I suppose.

In recent years a growing number of creator-owned books have ploughed what looks to be a Modernist or more likely a Postmodern approach; deconstructing the underlying mythos of comic book superheroes, something that stretches back to publication of Watchmen. And it is among these books (most of which I will say I have enjoyed), that a degree of nihilism is frequently part of the fundamental work in plot, imagery and dramatic beats. Books like Irredeemable, Black Summer (enjoyed this), Cla$$war (didn't enjoy this), etc. all take a view of superheroics beyond the norm of good guys versus bad guys in bright colours and vivid action. And all share a theme of violence which could be argued to be excessive or gratuitous. But that is not to say that they are not worthwhile works of course, but it is just that I have a dichotomy that I want to read different comic books for different reasons, yet if I had to read just one, it would be the kinder, gentler type.

So on to Irredeemable - the premise is simple, not precisely original, but interesting nonetheless. A great and powerful superhero (the Plutonian - a Superman analog) becomes the greatest, most powerful supervillain, and the world suffers for it.

Without giving too much away about plot and characters beyond the essential premise, the book (from writer Mark Waid and artist Peter Krause; from BOOM! Studios) tries to offer point of view to see why - really why - this hero descends into villainy. It is captivating but bleak - but then it has to be. The hero has to be seen to become so awful, so mired in atrocity, that to make the book work a dark tone is necessary. Yet due to that, the book is able to rise above the simple premise of good versus evil (which is of course at the heart of the story) to become an exploration of characters. Which in turn means it rises above what is probably the necessary violence depicted within.

Having read only the first tpb volume (collecting issues 1-4), I suspect that as the series progresses we will see parallels drawn between the Plutonian and those fighting to resists him (the heroes of the team known as the Paradigm). I will be along for the ride if the quality is sustained. DC and Marvel have done similar things in the past, but have ultimately retconned those character changes away. Waid isn't tied into any external drivers of licensing etc., as Irredeemable (and its subsequent companion title, Incorruptible) inhabits its 'own universe', so I hope he sticks to his guns and the title of the book and that the Plutonian does remain Irredeemable, at least until the end or near end, whenever that may be.

Irredeemable is a book I would recommend, especially for people who enjoy titles like Watchmen, Black Summer, Ultimates (volumes 1 & 2), the Authority and the like. If reading in tpb form, be mindful that the first volume doesn't feel like a concluded story arc, but instead very much like a chapter of a much larger story.
Posted by pulpcitizen at 01:02