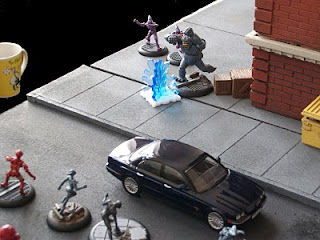 Played another game today against Rob, my erstwhile main gaming buddy, having lost my previous two games against him - and this time I won. The photographs didn't come out too well, so the best few show some action on one of the flanks of the battlefield.

It was a close fought game, and we played one of the Plots that we used last time out. If you remember my past comments, I mentioned how Rob kept a closer eye on the objectives that time, and so went on to win convincingly. This time I focused fully on the objectives and took an early march on scoring AGP (Agenda Points), so a close games ended 9 AGP to 11. 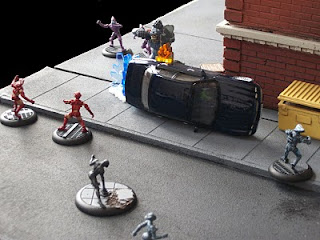 In my Team I had taken June Summers, but her AGP contribution (just 1 today) was not what swung the result. In addition I fielded Harrier who did very little, and Six Feet Under who made a big splash and was quickly targeted and taken out. My main successes were through Androida (grabbing AGP); Dr. Mercury as part-'beat stick', part harassment/hit and run (using his Meld* Action) and Starting Roll Supreme; Ace of Wraiths (dealt some big damage taking out Chimp Chi and later Nuke); and Blood Rose (her healing Actions kept a couple of models going).

It seems that reflecting on this game, and the last couple, we used some big Actions that don't often get used. By this I mean those Actions that use up all or almost all of the AP available to a given character. Nuke twice used Radiation with a Power-Up; Blood Rose got to use Blood Roses Bloom (a healing and movement combo); Ace of Wraiths got to use the Ace of Wraiths Action - taking out a Supreme and a couple of Minions and staying out of trouble in the last Round. These Actions are often infrequent due to their inherent cost and restrictions, but when the are used can have a big impact - which I think is a great feature of the game.

Rob used Apebot and Virus and they were fun to see used, facing off mainly against Androida and Dr. Mercury. Howler was also in Rob's Team, but wasn't his usual effective self, but that maybe because I targeted him knowing how dangerous he can be. Harrier is a Supreme I just can't seem to use effectively enough, although she has featured in my Teams on many occasions. 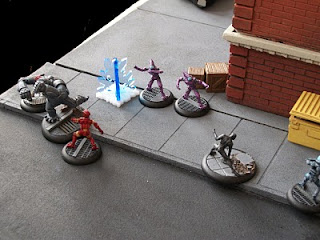 And if you are wondering about the acrylic markers? We use flame and smoke markers of different sizes to track damage on scenery; it saves book-keeping/writing stuff down and adds an extra visual element. Small counts as 1 point of Damage, medium as 5 points and large as 10 points. Works well for us. And the blue one? Rob suggested it would be fun if we had a marker to represent the water spraying out after a fire hydrant is ripped up for a Smash or Throw Action; I remembered I had possibly just the right thing and so voila! No effect on the game, just a little narrative touch to the battlefield.
Posted by pulpcitizen at 07:33