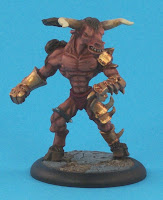 This mini was finished long before I took up dice and brushes to play and paint in Pulp City in earnest. This Minotaur mini was originally based to accompany my extensive and somewhat eclectic mix of generic supers themed minis. When the BOOM rules came around, allowing players to make up their own Minions, then it seemed obvious to re-base the big fella.

Now even though my mocked-up card for the Minotaur indicates it can be either a Hero or Villain Minion, it seems most fitting as the latter. Furthermore, I can primarily see the Minotaur as some kind of follower of the Forgotten, since that Sub-Faction owes its origins to the classical Greek myths, which is where tabletop Minotaurs owe their lineage to also, of course. 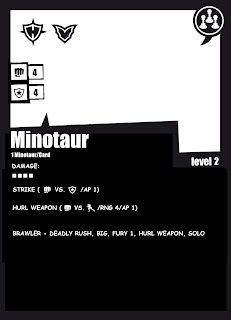 As is the case with many of my BOOM creations the Minotaur has Solo, becoming a Character Minion. Add in Fury 1 and Deadly Rush and this is a Minion designed to be fairly effective in Close Combat. I envisage its Hurl Weapon Action as being objects picked up and thrown. It is tough like the Giant Ice Golem, but the Minotaur is nonetheless a bit faster on its feet since it doesn't have Slow.

The mini is from the Reaper Warlord line, simply with a weapon removed.
Posted by pulpcitizen at 08:42