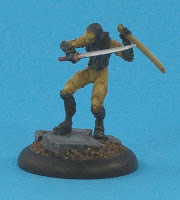 BOOM - this was a term coined to describe the fruits of the Minion Creation rules: Build Our Own Minions. I'll be posting pictures of non-Pulp City minis representing some of my creations along with the associated home-brew character card to go with them. First up is the High Tech Ninja.

I envisage the High Tech Ninja as a shadowy figure that could walk in the world of grey between the Heroes and Villains of Pulp City.

The model is from the Infinity range, which I feel sits well alongside Pulp City minis both in scale and proportion. A simple paint-job and voila. This was painted some time before most of my Pulp City minis and was re-based to match them. 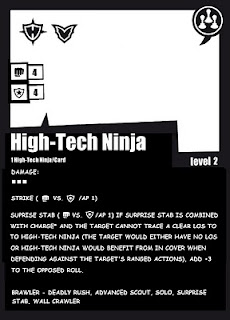 Thanks to the Solo ability, the model is treated as a Character Minion - this basically means the High Tech Ninja Activates as a Supreme would without needing to be Commanded. Advanced Scout means the High Tech Ninja can deploy further than usual onto the battlefield, while Deadly Rush increases the Minion's mobility.
Posted by pulpcitizen at 10:51