This is a small but growing modular range of mdf buildings from Sarissa Precision. Link to City Block products here.

I haven't tried/purchased any of these yet, but I may well consider doing so in the future. The buildings offer a variety of frontage options and can be stacked with additional floors, so a lot of customisation options before any other considerations.

There is a residential City Block coming (right) with fencing and steps, and apparently a warehouse too, so the visual profile of a mix of buildings should be nicely varied. The only downside for me is the integral pavement pieces, since that won't fit with my city boards. But if playing on table of a black or very dark grey it would give instant pavement and therefore road layout.
Posted by pulpcitizen at 04:44 3 comments:

This is the Encounter we used for the recent Rooftop Rumble Battle Report. 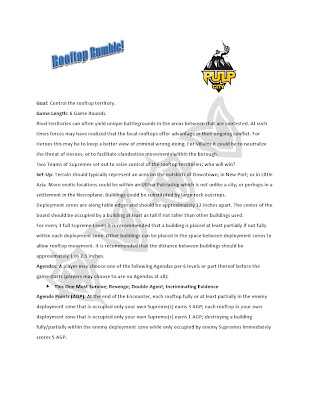 Click on image for bigger version.
Posted by pulpcitizen at 02:06 No comments:

Playing with Comic Life I thought I would revisit some older Battle Reports and re-do them in that style (find the original here), hence the redux; redux meaning brought back or revived. With every Battle Report a huge thanks must go to Rob, my long time gaming buddy, as the better pictures are almost always his rather than mine - cheers Rob! 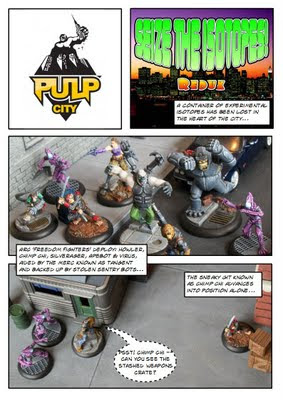 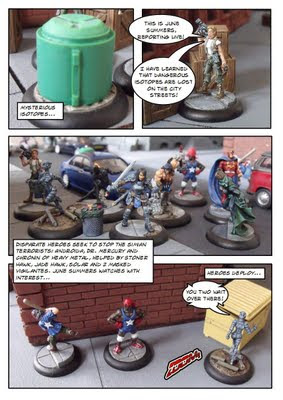 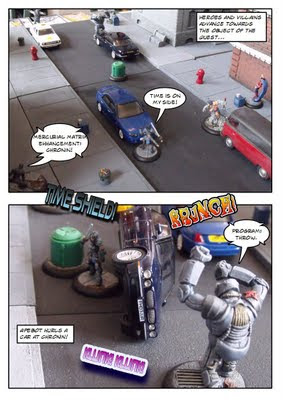 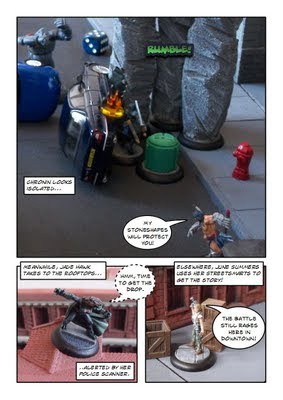 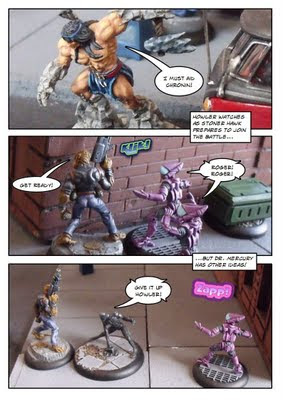 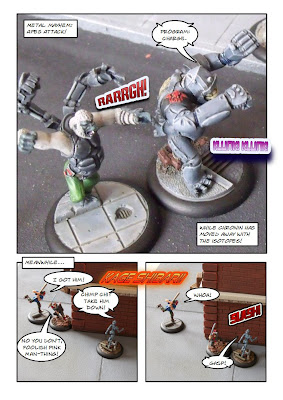 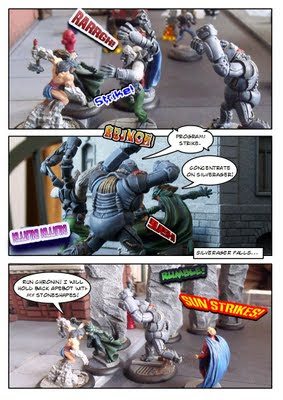 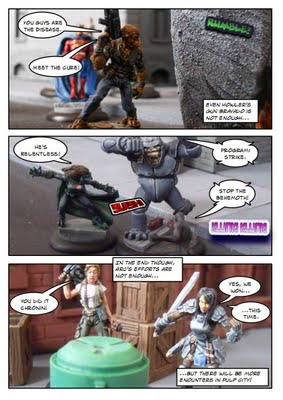 Posted by pulpcitizen at 00:19 No comments:

This time it is for Vin, who I guess is a fellows minis fan with eclectic tastes. It helps encourage me to see people sign up, so thanks to Vin and everyone else who has taken the time to do so. Cheers, and agin thanks to Vin for taking time out to stop by.

As reported in the next few days blogging may be spotty. In the mean-time I am reworking some old Battle Reports into my 'new style' since the first one like that was pretty well received, so stay tuned for the 'Directors Cut' or 'Redux' versions!
Posted by pulpcitizen at 00:14 No comments:

Another welcome, this one to Scorpion who has kindly signed up to follow Pulp Citizen; thanks very much for doing so. Hopefully I can continue to offer something of interest to those who check in.

Just a word to readers that later in the week the blog may go quiet for a little while due to relocation of the Pulp Citizen Cave.
Posted by pulpcitizen at 07:50 No comments: 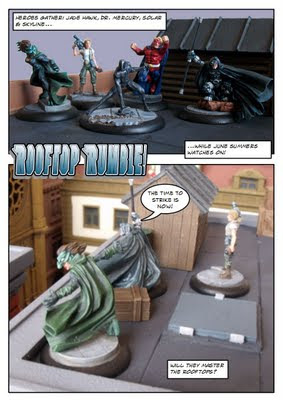 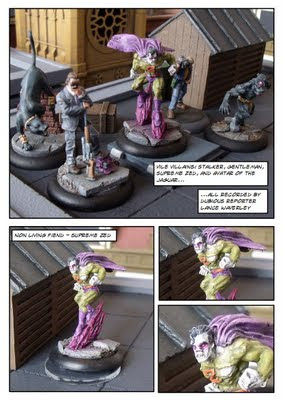 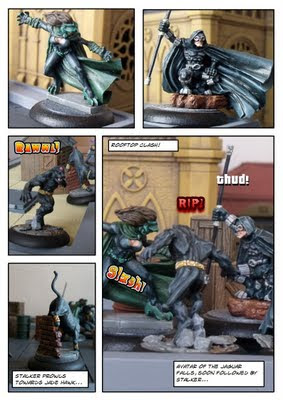 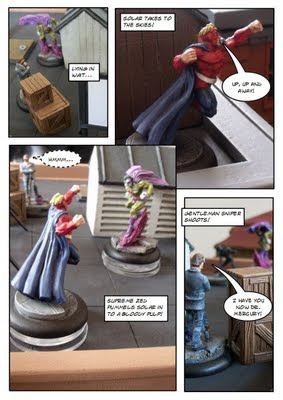 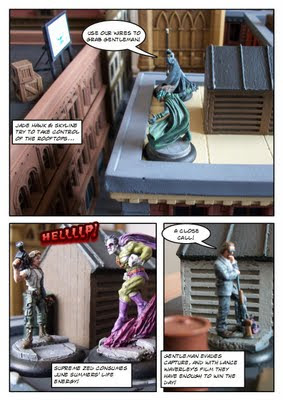 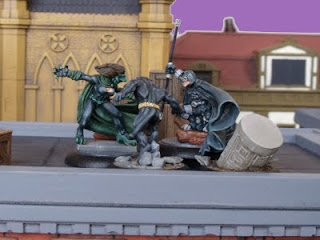 Rob and I played some Pulp City today, and the first game was a unique Encounter idea I had called Rooftop Rumble (I will try to get it written up soon, to be published somewhere maybe). The entire game was played across rooftops with clear objectives (for Agenda Points) which made for a change of typical Team selection (this was influenced by the need for Supremes with suitable abilities), and also forced some changes in approach since some characters were having to jump from one roof to another (we set the building up between 1 and 2 1/2 inches apart, with a dominating tower at the centre to block LoS). The final result was close run and Rob or me may do a full Battle report soon so keep an eye out for that. In the mean-time see the accompanying picture for an in-game shot.

The other game was play-testing, so not much to say on that at this time...
Posted by pulpcitizen at 11:30 No comments:

Another welcome post, this time to CLAM who has joined today. We share some of the same interest in blogs we Follow, so i hope that means Pulp Citizen will prove to your liking! Thanks for Following.

On the Pulp City hobby front there are bits and pieces I have been working on, including:
- Splashing paint onto Sovereign; Stinger, Scorpio Fencer
- Making some Minion cards (including some for a special game later in the year, and some to go with some of Rob's own supers minis)
- Finishing some painting on Ziterdes buildings for s special 'Rooftop Rumble' game planned for next week
Posted by pulpcitizen at 08:22 No comments:

Welcome to the Pulp Citizen's 60th Follower (I never thought I would be able to say/type that, BTW!) - Jacob Walker. A big thank you as ever to Jacob for taking the time to look in on the blog - very much appreciated. I imagine Jacob is a minis fan of eclectic tastes looking at his Followed blogs (something I do as it helps point me at blogs I may not have considered before).

There are some great blogs out there with some interesting stuff included, which always brings me to consider this one in wider context. For example, for a blog pretty much focused on one specific game and minis range, by far the most popular feature/posts are those for paper craft terrain. On the minis front, one stands head and shoulders above the others for page views (Chimp Chi; although Avatar Of The Jaguar has been very popular in the past week or so, and there has been sudden rising interest in Stoner Hawk as well). Stuff I find interesting I guess.
Posted by pulpcitizen at 00:18 No comments:

Painting Perun - a Slavic analogue to Thor in some ways - in recent days amid seeing the Thor movie and re-reading Ultimate Comics: Thor prompted me to put down a few thoughts.

I really enjoyed the movie; I am a comics fan and so I am occasionally wary of the (necessary) liberties taken with film adaptations, but this felt faithful enough to the source material to be recognisable and respectful in my view. I thought it was a well-structured film that managed to incorporate a lot of the Thor/Asgardian comics-mythos without being overwhelmed in doing so. I enjoyed that they got the explanation of what the Asgardians were/are done and out of the way so quickly that the movie could get on with being what it was.

I really liked the designs - echoing the source material sufficiently in so many instances. I thought Chris Hemsworth played Thor as a good translation of the early comic book persona, and I loved the Clint Barton (Hawkeye) cameo, as well as the end credits scene. The three central male Asgardians - Thor, Odin and Loki - were all well-cast, and I thought Tom Hiddleston's performance was great and subtle where it needed to be. Thoroughly recommended, and after the end-credits scene, roll on Captain America and next year the Avengers. I wonder if we have seen a plot point for the team movie? 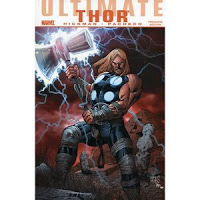 Following on the heels of New Ultimates, this series concluded just before the movie launched. The art is great as I love Carlos Pacheco's work on stuff like Avengers Forever and Ultimate Avengers, and the writing was great on a book which essentially sets out to define an origin for Ultimate Thor, a character from the first Ultimates series. What we see is a story not weighed down by decades of regular Marvel continuity, but that at once sets out to reconcile the Mark Millar vision of Thor (Ultimates; Ultimates 2) alongside the version seen in New Ultimates (which, under the oversight of Jeph Loeb, alas resorted to the old-Marvel cod-Shakespearean Asgardian dialect - a big mis-step in my view), while explaining both Thor's ablities and his relative lack of power compared to the reality shaping power possessed by Loki in the earlier Ultimates stories. The story takes place across 3 eras, and features Ultimate Asgard, Frost Giants in the German WWII army, a small side-mystery, and a neat explanation that posits Thor into the Ultimate Marvel Universe. I really enjoyed it at first, second and third sitting so wholly recommend it to anyone interested.
Posted by pulpcitizen at 09:58 No comments:

This welcome goes to Colonel Shofer, a name I saw recently (even though I can't recall where), and who has a blog of his own (here). Colonel Shofer's blog looks an interesting and eclectic affair with some superb minis on show - in other words well worth a look. Thanks for signing up, and trust me I will be interested to see what is posted in future on Colonel Shofer's Mild OCD Model Blog.
Posted by pulpcitizen at 13:21 1 comment:

Not a productive 4 months on the Pulp City painting front (or indeed any ranges that I tackle), but hopefully I can get some momentum on the go, finishing 3 Pulp City figures in the past couple of weeks as well as one other (a Hasslefree zombie). I think I may have posted previously that in one of the months I painted nothing, but that doesn't seem to be quite the case in review. Oddly half the Pulp City minis I painted this year were done in a single week!


And on the 'painting table':
- Captain Hadron
- Mini Hadron
- Giant Hadron
- Guerilla (still there!)
- Red Baron
- Perun (base colours all blocked out)
- Sovereign (most base colours done, main coat colour shaded and highlighted)
Posted by pulpcitizen at 06:52 No comments:

Slightly misleading title as Stalker is not an aspect of Solar, but as an intrinsic part of his mythos deserves a place in the line-up. 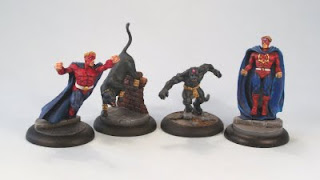 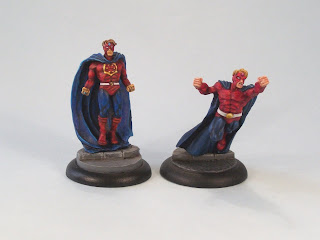 And here side by side are the two versions of Solar - old and new - for comparison.
Posted by pulpcitizen at 03:07 No comments:

I made these as some extra 'rooftop scenery' for my Pulp City games. I cannibalised some Tamiya 1/48 Road Sign sets to provide the basis for the billboards, and mounted a couple onto the sides of Ziterdes Apartment Buildings.

The Pulp City Pirates are the American Football team that Dead Eye was linked with before his fall from grace. I try and think these things out, you know! Even added a little ® symbol for extra 'authenticity'. 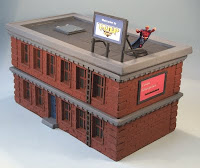 I made up a sheet of 8 different designs, so keep an eye out on future battle reports for alternatives.
Posted by pulpcitizen at 10:29 1 comment: