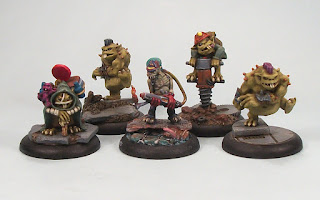 With the new addition to my Grimm collection, this is what is painted in my cabinet so far; most by me but the new Grimm Flamer painted by Maru.
Posted by pulpcitizen at 18:00 3 comments: 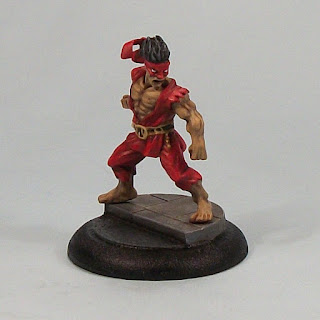 Wow. I have painted a new mini; it has been a while has it not?

For me this has been a long gestation period. Even before having the mini in hand, I have been 'working' with Crimson Oni for what seems like a long time - 20-21 months ago working from the brief I was given, Crimson Oni took shape in rules terms; and took further shape, and changed again, and again and again. And that is all part of the process I guess.

Anyone remember the 'mysterious stranger in red' from Christmas Madness 2010? Part of Crimson Oni's play-testing!

It has been weird and enjoyable  taking a concept that was sketched out by someone else, but then putting what is inevitably my own stamp on things. While by the end it is not a single voice that creates the rules for these guys - Maciej, Devon and me will all argue things in different ways to make things as good as we can - I will take the rap for anything you are not happy with with Crimson Oni. 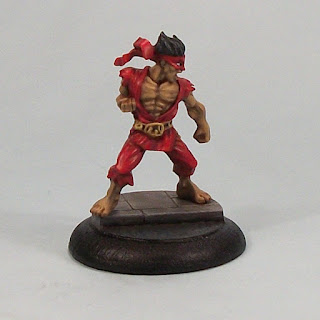 In game terms he is a beast in melee; he does not necessarily have the best close combat Traits and Skills, but he has some potent Actions meaning he can deliver a lot of punch, and yes, Five Point Exploding Heart Technique was always intended to be particularly deadly. He can mix it with the best of them so enemies should approach with caution.

I know some may think that the Little Asia guys have come out of nowhere- basically the Jade Cult and Crimson Oni and Foxxy Blade - but the seeds have been around throughout the history of the game's fluff; Chronin faced and killed an earlier incarnation of Shadow Mask in her fluff, and Green Emperor is mentioned there; there has been mention of the Green Army (the original name for what is now Jade Cult) going back that far; in the Guide p. 103 has a couple of paragraphs hinting at what was (and still is!) to come, as well as showing the Crimson Oni and Foxxy Blade concepts.

The coolest thing about Pulp City for me is that the potential is pretty much limitless, and that is in a game with lost of Sub-factions as well as playing from mixed Teams. 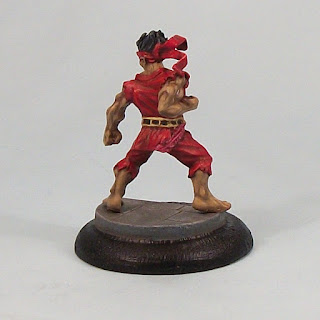 Back onto the mini, when I thought I had finished it the other day I realised after taking photographs I had forgotten to paint his lower teeth - that has since been rectified.

Hopefully I will be able to feature him in a new Battle Report soon.
Posted by pulpcitizen at 10:40 2 comments: 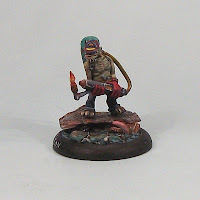 This little fellow arrived safe and soundly yesterday, and I have to say I am very pleased to acquire him!

Painted by Maru from the Pulp City Forum, who has done some studio painting for Pulp City, including some of the Ulthar if I recall correctly.

This is one of a future batch of Grimm - and will be called a Grimm Flamer, although of course that could change; in my Salute pictures you may have noticed that there were some resin masters for some of those future Grimm releases, and that this was one of those.

So not only do I get a really nicely painted mini, but it isn't even released yet! I know - I am very lucky. 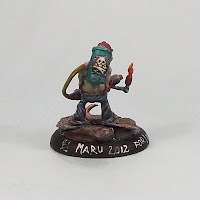 I enjoyed taking part in the Mini Exchange with my own contribution (Sgt. Bale Extreme), and well done to everyone who has painted and dispatched a mini for someone else to enjoy. A big shout out too to varagon of the Forum and a fellow contributor to Pulp City as he organised the thing. Well done Bob.

Finally, a big thank you to Maru for painting this mini, and getting hold of it to send to me. Thanks again.
Posted by pulpcitizen at 12:53 1 comment:

Tales Of A Tabletop Skirmisher Competition 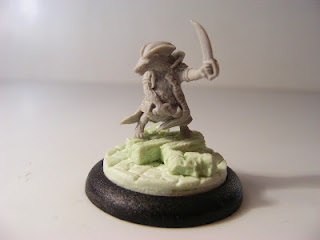 I just wanted to give shout out to a very cool competition over on Hendybadger's Tales Of A Tabletop Skirmisher blog.

Hendybadger is offering the chance to win one of an exclusive few copies of the Hendybadger mini: this link will let you know what you need to do.
Posted by pulpcitizen at 03:53 1 comment:

Welcome aboard to Follower #109 - ARBAL. Even after a couple of years it always helps keep my enthusiasm going for the blog to see new people join up, so I am really thankful as ever when someone signs up - so a big thanks to ARBAL and of course to everyone who stops by.

As mentioned in the last post, I hope to finish Crimson Oni this weekend and get some paint on a few others.

I am also making some plans for a future Battle Report Encounter;. I feel like doing something rural  (like the UK-set game), so that I can use trees, hills etc. and see how that affects gaming. I picked up some Kallistra hills (or maybe they are escarpments) at Salute and want to give them a try.
Posted by pulpcitizen at 23:40 3 comments: 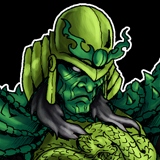 Okay, I know the blog has been quiet for a couple of weeks or so. There are very good reasons for that, which I hope to get to in the near future. in the mean-time, please be assured the Pulp Citizen is not going away, I have just been very, very busy with some Pulp City stuff.

There may be some changes afoot (relating to those 'good reasons'), but I will keep blogging, and I hope to finish Crimson Oni at the weekend to show him off.
Posted by pulpcitizen at 04:22 2 comments:

I have had these buildings for a while, although one has sat part-painted for a long, long time. Observant readers will probably recognise the Diner from some battle reports, but the Frosty Bar has only recently been finished.

Both were built from simple plastic kits from the Plasticville range, which also includes the church I  have (listed in catalogues as a Cathedral, I think) and the Aircraft Hangar which we use as  a warehouse.

I purchased these from Dark House Games, whose proprietor I have always found friendly and helpful.

This just had a simple spray coat of Bolt Gun Metal, with slightly more detailed painting on doors etc. When the paint starts to wear I will go over it to create more of an aluminium finish. At the front I had to glue some plastic-card strip over writing that said Plasticville which was simple enough to do.

In gaming terms I find it a nice size to block line of sight and allow speedy movement onto and from the building. The roof lifts off which is pretty handy.

The painting has been a bit more detailed on this, with more colours, dry-brushing and washes used.

Below where it says 'Frosty Bar' there was relief writing saying Plasticville, which was filed down reasonably easily. 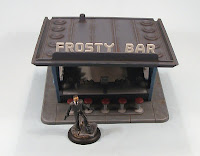 This also has a removable roof. The Frosty Bar has yet to be gamed with, but I have a table set-up in mind that this will be perfect for! I have some fencing on order from Fenris which will be part of the game I have in mind...
Posted by pulpcitizen at 13:36 12 comments:

Another 'welcome' post, this time going out to Henry's Tat, proprietor of the blog called Henry's wargames and strange tat. If I recall correctly, I *think* I saw the demo game Henry's Tat was running for Carnevale at Salute, and if it is the board I am thinking of, then I have to say that I really liked that board. Henry's Tat seems to be a hobbyist of commendably eclectic tastes, so I will be reciprocating and Following his own blog with interest. Thanks again to Henry's Tat and everyone else who has joined (and those who have stayed! especially!).

On my Pulp City front - I have seen a sneak peek of the mini I will be getting in the mini exchange and it is superb; great paintwork from the fantastically talented Maru, and a mini that has not yet been released! Woo-hoo! This link goes to the Forum post about it - I can't wait.

On my own painting, well Crimson Oni is proceeding well so hopefully he will be finished within a few days, followed by Shadow Mask after that I guess.
Posted by pulpcitizen at 03:04 2 comments: