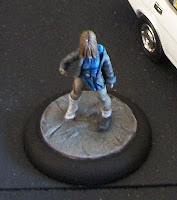 Rob and I played out an Invasion game today, intended for a special upcoming 'seasonal' posting (expect it in around a month or so...). No hints as to the outcome at this time.

Until the Battle Report is finished and posted up, here are some preview pictures, hopefully to whet appetites. The game featured some custom markers made by Rob, such as this one...

The were a crucial feature of the Encounter and we knew immediately when discussing options for Tokens what they should be represented by. Expect these to get annual usage! Great work Rob! 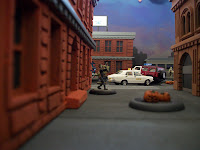 I recently finished this and thought I would draw a little attention to it. Part skim-history and contextualisation of trends of US comic book superheroes (with an emphasis on DC and Marvel), and part memoir of Morrison's life reflected through his involvement with comic books as reader and later creator, Supergods was something I found very entertaining.

There is inherent bias in the book; this is no purely subjective work. Morrison as a figure becomes strongly placed within the text as the historical aspect catches up with his own life-time, and so his viewpoint is conveyed within his writing and has to be taken for what it is: one commentator's viewpoint. But that is to miss the point of course.

I am not a slavish fan of Grant Morrison's work, and do not enjoy everything he does, but what I do enjoy is that he is a writer of 'big ideas' and is always looking to incorporate them into his work, whether science, philosophy, religion, culture, media, life, death, love or whatever, it finds its way into his work over the decades.

I would recommend Supergods to anyone who likes at least some of Grant Morrison's work and is looking for a read about comics that is no dry history of the subject.
Posted by pulpcitizen at 03:53 No comments:

Some occasional Pulp City painting of late, base colours on: Arquero, Riposte and Ra'Leigh, Aquarius Warlord.

In the meantime I have been painting lots of other minis (well lots by my standards, a piffling amount in the yes of some other painters I am sure!), which will be pressed into service for an upcoming special Battle Report. I have one word: braaaaiiins...
Posted by pulpcitizen at 03:40 2 comments:

Another 'welcome aboard' post, this time for Skywatcher, a contributor to the Op-For (Opposition Force) collective-Blog (link here). As alwasy I really appreciate anyone taking the time to sign up as a Follower of the Pulp Citizen, so big thanks.

Opposition Force is the blog of Op-For, an elite crime fighting unit who's members span from Santa Rosa to the East Bay, dedicated to wiping out poor sportsmanship, unpainted or poorly painted figures, boring games and crappy terrain.

So no pressure there! (mental note to self - must not show crappy paint-jobs or terrain!). In all seriousness, a nice philosophy with tongue in cheek explanation methinks. Once again thanks for signing up Skywatcher.

On another note, I just wanted to plug (once more) my 'other' minis blog - the Eclectic Gentleman Tabletop Gamer (link here); I will be hopefulkly showing off more and more zombies there in the next few weeks ahead of a game planned for later in the month. With luck and motivation that is...
Posted by pulpcitizen at 01:50 1 comment:

This was our most recent game. We played a mix of 2 Plots: Smackdown! and Take & Hold to see how mixing two sets of scoring would work out. The game was pretty decisive as it turned out...

The best pics are mostly Rob's supplemented by some of mine; so big thanks to Rob as always. The backdrop is new, painted by me in order to reduce the need to restrict angles/crop pictures/use Photoshop or GiMP magic to remove non-game background elements. 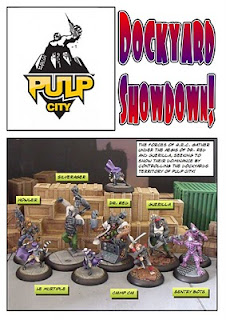 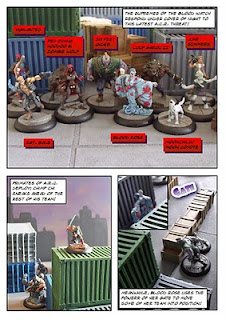 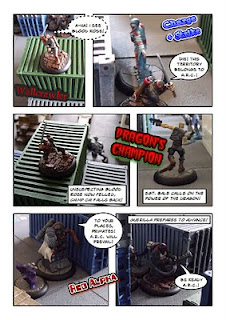 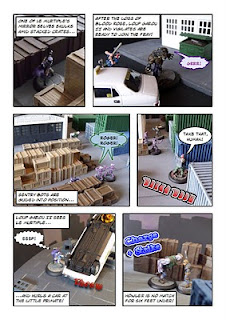 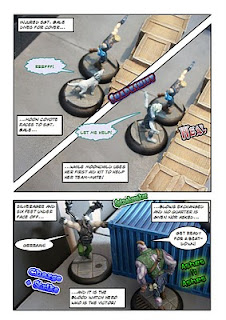 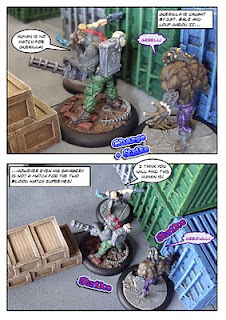 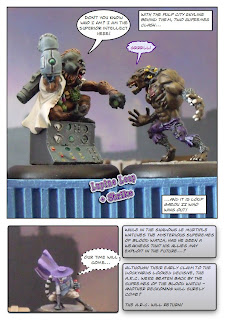 A win for me then, and decisively so. After 2 Rounds I thought it was all over for me as I had lost Blood Rose and taken a battering, but then things turned in my favour and with the trio of Sgt. Bale and especially Six Feet Under and Loup Garou II, I was able to tear into the ARC Supremes with abandon.
Posted by pulpcitizen at 07:48 3 comments:

Tommygun is a name I came across via Warseer. His paper-craft terrain output is prodigious and it is great to see how he has honed and continues to hone his skills, both with textures, but the construction side of his free paper-craft offerings. His site features something for everyone from the recent past, modern/contemporary and near-future eras. well worth a look and donation if you find a number of useful items.

His stuff can be found: here.
Posted by pulpcitizen at 06:07 2 comments: 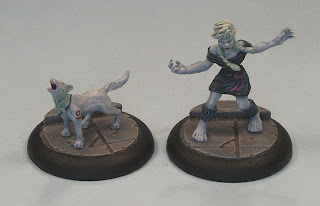 This teenage Native American is a werecoyote, choosing between here human support form and coyote speeder form. She belongs to Blood Watch but thanks to the half of the Moon Amulet, under certain conditions, she may be fielded in The Coven.

The human-coyote hybrid form (Moonchild) was sculpted by James van Schaik, and the animal form (Moon Coyote) by Jarek Smolka. A quick paint-job this on as I painted both minis together and there is little variation of colours on offer on either. 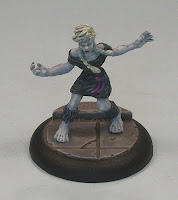 I like to think the paint-jobs are pretty understated, but fitting I feel, and I have pretty much used the official versions as a broad template, even including a magenta half moon motif to help break-up the look of ther tunic as with the studio version. 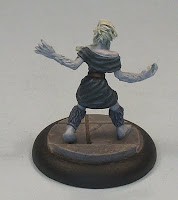 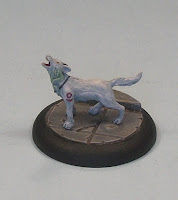 In game-play Moonchild/Moon Coyote is a Shapeshifter, with each form having some specialisation, but overall offering a Supreme specialised in Support and mobility. 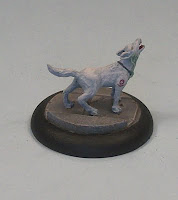 Further out it hopefully won't be too long before Blood watch can field their own Level 12 Team with at least a couple more Supremes lined up.
Posted by pulpcitizen at 05:09 4 comments:

Another 'welcome' post going to a new Follower of the blog; thanks to Lorenzo Calvi for taking the time to sign up take a look at whatever it is I a m posting. As I have said before, seeing new names and seeing the audience and views stats helps keep me going in blogging away, so I am thankful to everyone who has taken time out to sign up and keep a watch what is happening in this blog. And once again thanks to Lorenzo Calvi for taking some time out for this little blog. Much appreciated. 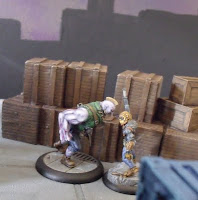 On Pulp City matters, we had another game today, with me using the recently reinforced Blood Watch against ARC in the hands of Rob; look for a new Battle Report soon, but in the meantime check out this picture as a taster.
Posted by pulpcitizen at 06:22 No comments: 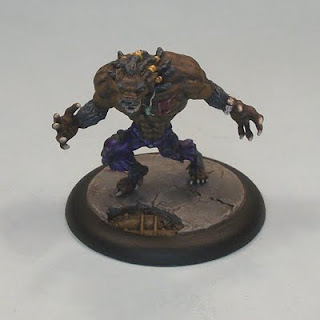 Loup Garou II is the second of his name to work for the Coven. Though Hoodoo has slain the orginal Loup Garou this new incarnation is entirely different. His fragment of the Moon Talisman transforms him into half man half beast. A creature of uncontrolled savagery he seeks out his enemies and rips them limb from limb.

Sculpted by Erick Redling - his first foray into Pulp City I believe, this Loup Garou is the second known bearer of the name.

A big brute of a dread-locked werewolf, I was very eager to get painting on this one. Alas a bit of paitence would have helped since I noticed that as I was painting there were parts I did not prep adequately enough. 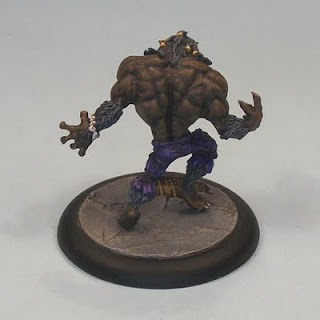 Loup Garou II is a real combat monster in every sense of the description. Normally a Villain, if Teamed with Moonchild/Moon Coyote, he then becomes Blood Watch and a Hero! Very useful!

Forgive the funny angle on the pictures - I was trying out a new mini tripod and so will need to elevate the minis if using it again in the future.
Posted by pulpcitizen at 10:47 1 comment:

I have been working on Moonchild & Moon Coyote, and Loup Garou II in the past few days (and a tiny bit on Arquero).

As I am painting I can see that my green stuff-filling and smoothing of pitting on Loup Garou II leaves a lot to be desired, but it is so far in now I think I won't go back and try and recover it, but instead press on.

My first Pulp Monster is cleaned up, ready for soap washing before assembly and priming/under-coating BUT alas I have lost my circle cutter which I used to cut the circular insert for Hadron's base and was going to repeat the technique here. So no further Monster progress until I get a replacement cutter.
Posted by pulpcitizen at 03:03 No comments:

What is the Breast Cancer Brawl?

The Breast Cancer Brawl is an effort to raise money for breast cancer research, advocacy, education, and support organizations. The event is a fantasy table-top miniatures tournament and… painting competition using the popular WARMACHINE and HORDES game systems.

The above text is from the 'About' section of the Breaster Cancer Brawl 2011 site (here).

My understanding is that the organisers want to spread it beyond the identified games to include games such as Pulp City. It is self-evidently a good cause and so I decided to draw attention through my blogs. Gaming in a good cause - 'nuff said as Stan Lee (maybe once or twice) wrote.

Now maybe I need to paint something pink in honour of this initiative...
Posted by pulpcitizen at 02:07 2 comments: