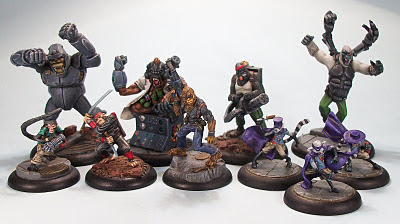 Despite finally finishing Guerilla in July, I have yet to post my ARC minis collectively, so being long-overdue, here you are.

The ARC are freedom fighters to some, militant paramilitaries to others. Opertaing out of the abandoned Pulp City Zoo they have been known to work alongside both Heroes and Villains around the city, all the while pursuing their own agendas. Their leadership is currently formed by the sometimes-conflicting ideologies of Guerilla and Dr. Red - will a third prominent ARC member rise to destabilise that unsteady status quo?