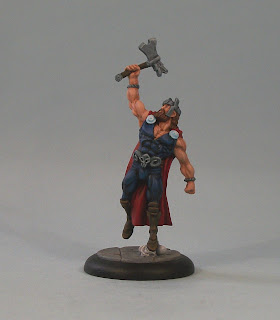 In every generation there is one brave Polish man who wields the lightning in the mankind's darkest hour. He lifts up the runic axe, older than the people of this land and the power of the ancient deity starts coursing through his veins. Old gods still watch over their children and stand vigilant when tides of evil rise.

The current wielder of Perun's power is a student from Warsaw whose grandfather and great great grandfather used to be Lightning Lords years ago. Stanislaw Starzynski became marked with the lightning rune when he confronted Forgotten minions sent to recover Szczerbiec, the coronation sword of Polish kings. 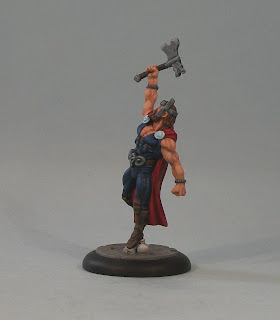 A pre-release at Salute, Maciej was kind enough to have one of these on hand for me, and from the moment I saw the first shots of the green (and became aware that there will be some international Supremes - expect more by the way!), I knew how I wanted to tackle him, and I don't think that changed at all during execution.

I really enjoyed painting this mini. I guess that my enthusiasm has been no doubt fulled by the recent Thor movie, and reading Thor stories in New Ultimates and Ultimate Thor as well as Avengers comic books. Marvel have their own Perun (and maybe DC also?), but this is a special mini to me. I have seen at least one other super-hero mini styled on Perun and I think this one wins hands down. I think James Van Schaik has done a stunning job in sculpting this one. 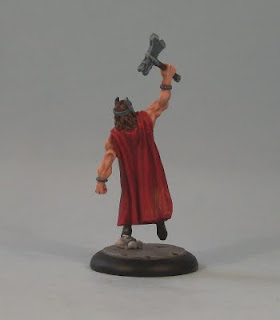 I green-stuffed what I would hope would pass for a tiny wind-swirl/cloud beneath his foot to represent wind lifting him into the sky.

Perun's game rule are yet to be finalised, but let me say that he is likely to be a true powerhouse of Nature on a par with Solar; Villains beware...
Posted by pulpcitizen at 03:34