No Longer Mighty - The New Crusaders

Not much on the minis front right now as the (lower) Pulp Citizen Cave has been recently co-opted as a store-room for bedroom furniture as the main bedroom has been decorated. So the only stuff I have managed was brief and modelling base (preparing some bases for Monsters; 80 mm Fenris recessed round-shoulders as the basis) and basing up some Pixels kindly given to me by Hendybadger (more on those in due course!).

So in lieu of minis and modelling (I have been able to pitch in some writing and development bits and bobs in that time...), back to one of the reasons why Pulp City was such a big draw for me: comic book superheroes. Now in tone Pulp City probably reflects much of the tone from the big two over the last decade or so, but as I grow older, I find my comic-book reading sensibilities are actually changing so that I yearn for simpler, less gory, less sexually-suggestive fayre on the whole. And DC in particular are not aiming in the same direction. Marvel I find strangely more recognisable. 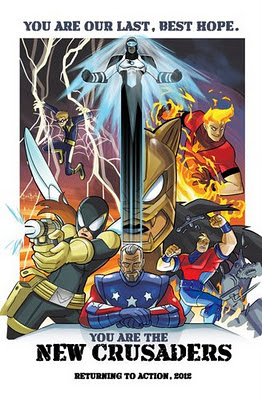 So it was with a warm smile that I saw news that one of my favourite comic book properties (see posts here and here) is making a come-back, and seemingly with a tone to my liking. The Mighty Crusaders are giving way to the New Crusaders, and it looks good to me.

It appears that the new stuff will be in digital format first, with the possibility of print collections later (if understand a source of mine correctly). So pleasing all around. Yes, purist may baulk, but I have to say this is the kind of thing I could really like, so happy times even as my other comics reading diminishes (DC for example).
Posted by pulpcitizen at 07:08