Comics: Red Circle - the Shield and the Web 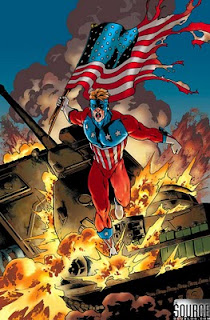 I have been a tabletop miniatures gamer for probably circa 20-plus years, but before gaming, and for something like thirty years now, my main diversion was comic books, particularly American comic books, and among them the adventures of gaudy superheroes and supervillians.

I still read comic books regularly, although the volume is diminishing due to increasing dissatisfaction that the 'Big Two' publishers (DC and Marvel) are focused on hanging much of their output onto 'events', whereby something significant or potentially catastrophic is happening on a line-wide basis. In the past five years for DC, and seven my admission of their own marketing for Marvel, event has segued into event, meaning that the business of just telling good standalone stories has been overlooked in my opinion. This is what brings me to discussing two titles that are among those that I await most eagerly each month - The Shield (right) and The Web (below). Both titles launched out of a series of one-shots written by J. Michael Straczynski, reimagining old characters from a different publisher (Archie Comics) to fit in the wider DC Universe (DCU).

The Shield tells the story of Lt. Joe Higgins, US Army superhuman asset (he doesn't see himself as a superhero), whose father is missing, and who suffered injuries that were healed and compensated for by a bleeding edge technology nano-tech war suit. The Web features John Raymond, a playboy whose worthy brother is murdered by criminals, and so John invest in advanced technology to become a costumed crime-fighter. If you are thinking Batman, then this tale is a fantastic inversion of that, featuring a hero who makes understandable mistakes and tries to take short-cuts on his journey, learning lessons as he does so. 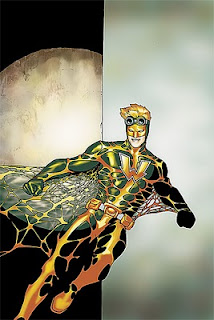 For me the two titles are refreshing as they are not burdened by the weight of the line-wide events, the downside is that sales have probably been hurt as a consequence, something that has been suggested by the architect behind their relaunch:

J. Michael Straczynski (from Newsarama interview): See, it's my view that a Big Event should be in service to the individual titles, not the other way around. In other words, the BE serves as something of a sampler platter for characters who you might not otherwise read. You read the BE, find Character X interesting, then go and check out his or her book. Now it seems like the tide flows the other way, with the titles bent in service to the Big Event in ways that may actually reduce accessibility to or interest in that character for new readers. 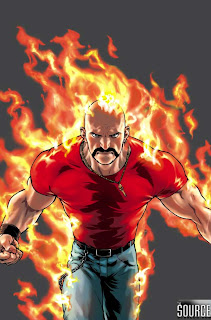 Both titles are early into their runs, with the ongoing monthly issues in the hands of other writers following the launch by JMS. Each has a second feature with one of the other characters from the line (the Shield is accompanied by Inferno - right - a kind of superpowered take on a mix of the Bourne Identity and the Fugitive; the Web is backed up by the Hangman - below - a supernatural avatar of justice empowered by forces that may be good or nefarious - he does not know which). 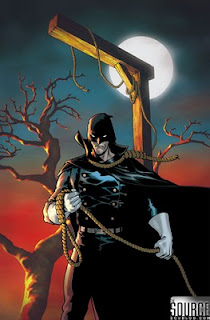 I really enjoy these books. They evoke for me the magic of comic books that I had from the early days of reading them, something very few titles do these days. They are not hamstrung by having to adapt to massive events elsewhere in the DCU, and each month they deliver good stories and art, which is all I ask for. There are four different stories being told, each with a different focus and tone.

The stories were launched with an interlinked series of one-shots under the banner Red Circle - a nod to the history of the precursors to these reimagined versions. Although not now under that banner formally, there is a strong sense of cohesion between the stories, not least that three of the authors (Eric Trautmann, Matt Sturges and Brandon Jerwa) are working closely together to make their stories and plans as entertaining as possibly. Of all the lead and second features the Web surprised me most as I probably had the lowest expectations of it going in, and so it wholly and unequivocally confounded those expectations - in the first four issues Angela Robinson crafted an engrossing and surprising, and ultimately refreshing read. I am posting about them just to share my enthusiasm for these titles. If you are a comic book fan, and possibly nostalgic for less event-driven stories, then you may be pleasantly surprised if you give them a try.


A Little Bit of History Repeating
This isn't DC Comics first foray with these characters. In the early 90's they had a short-lived line called !mpact Comics which was set outside the DCU, and featured different versions of the characters/concepts, again a reimagining of the source material.

The Red Circle characters were originally published by MLJ Comics (later called Archie after the success of that character) in the 1940's. In the late 1950's Archie tried some new heroes (the Fly and a new iteration of the Shield called Lancelot Strong). This was followed in the next few years by other new characters (the Jaguar, Fly-Girl), as well as the return of the 1940's heroes with a few changes along the way. In the mid 60's the characters featured for a short-lived period in some highly camp stories under the Mighty Comics banner.

The late 70's saw a few new tales and the use of the Red Circle label, and in the early 1980's the heroes came back under the Red Circle (later Archie Adventure), in a number of once-again short-lasting titles. !mpact followed after that, as well as at least one more aborted-before-it-began relaunch (Spectrum), and eventually Archie would publish a small handful of comic books featuring the characters in a quite disparate way. Cut to 2009 and DC's licensing and reimagining (for the second time) of the characters, and the launch of the DC Red Circle heroes and The Shield and The Web comic books.