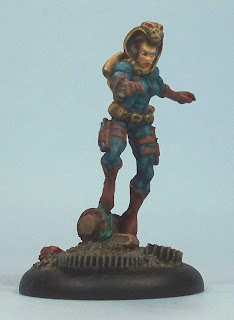 The world first learned of Bethany Bates when Pulp City Planet printed a front page story “Miss Frankenstein” accompanied by a gruesome picture of a basement full of bodies and by graphic revelations from the authorities who tried to stop the serial killer.

First off - I really like this model. But boy, has it proved a pain! An excellent James van Schaik sculpt has caused me a couple of different problems for a common reason. The mini has a separate arm, which is where the sense of depth created by having the two arms pointing along different planes works well. On the downside the separate arm has dislodged itself once already after painting commenced, and also has meant it too me three attempts to adequately photograph it due to the variable points of focus. 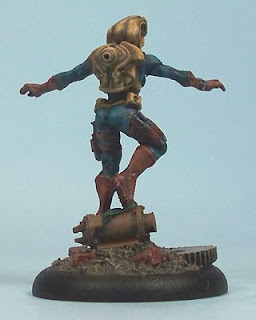 Those issues aside (i.e. my own shortcomings) I love the mini. James van Schaik has done an excellent job, from the well-realised body-suit to the caduceus-inspired snake-motif helm (very Cobra and VIPER as well).

In game terms the model is well-placed to offer Support capability (healing through the Heal-Kill exclusive action as well as her Team Ability), and also ranged offensive capability.
Posted by pulpcitizen at 10:56