One of my favourite comic book series of the past 10 years, and likely amongst my current all-time favourites list are the 26 issues of the first 2 volumes of the Ultimates. I plan to offer a few thoughts on volume 1 here.

In 2000 Marvel launched the Ultimate Universe, a reinvention of many of their most popular (and eventually less-stellar) superhero and supervillain characters in new titles that were started from scratch, without the weight of continuity and back-story that hampered the main Marvel Universe titles. Of course after 10 years of the Ultimate Universe it now has its own fair share of weighty continuity, but more on that at another time possibly. 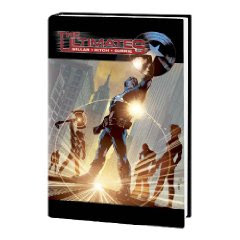 Beset by delays through the course of publication of volume 1, the reputation of artist Bryan Hitch was hurt by his own admission in some ways, yet very much positively cemented by the quality of the work he turned out. Like it or otherwise however, without Mark Millar's writing the book would surely not be what it is - a solidly-conceived contemporising of the Avengers (Marvel's premier super-team of headline characters, that was surpassed in popularity and so overshadowed in the 70's and 80's by the X-Men). This update and modernisation of concepts changed some of the trappings associated with each hero, whilst they remained fairly recognisable. Millar went a step further however, by tying in themes that are recognisable to contemporary news-watchers, making a heady mix of updated scientific ideas around the heroes as well as adding a strong political dimension.

The first issue (of 13) that I picked up was issue 7. I was intrigued. However it was the next issue that really grabbed me. Opening with what I can only describe as a very much Matrix-influenced set-up as two super-able characters walk calmly into a target building, we are treated to a level of action I feel few comic books have managed to equal, let alone better. Given the medium has no real budgetary constraints in terms of depicting action, very few artists achieve a depiction that could be likened to 'cinematic', but Hitch did exactly that in issue 8. Frank Miller and Alan Moore have highlighted that comics are their own medium, capable of things that film is not, yet that does not mean that comics cannot benefit from trying what can be done in a movie, and I felt that one issue delivered a breath-taking level of action that few comics ever achieve. I can only put that down to the sense of 'realism' (well as realistic as these things get) that Bryan Hitch provided, while Mark Millar was able to devise a genuinely thrilling sequence of events, even if as noted the shadow of the Matrix looms large in many ways, at least in my view it does.

Ultimates volume 1 is very much a tale of two stories. The first (Super-Human) deals with the creation of the Ultimates team (Captain America, Iron Man, Thor, Giant Man, the Wasp and the Hulk, organised by a Nick Fury drawn like Samuel L. Jackson) and their use to deal with a threat from within. It very much addresses the notion of power accorded to recognisably human and imperfect people. The second arc (Homeland Security) adds new heroes (Hawkeye and Black Widow particularly) and gives a whole new level of threat as various forces work against the Ultimates from their past and also from elsewhere, updating a staple Marvel alien race in the process.

I loved all 13 issues of volume 1, and recommend it whole-heartedly to anyone who likes big action with a dash or more of politics in their super-heroic fiction. The art is gorgeous, and the writing shows that the title had specific designs in the mind of Mark Millar. Some have criticised the changes he made, or indeed the depth of his work, however I feel that such criticisms miss the point that I feel he intended - writing a comics blockbuster, something comparable to a movie in terms of high-concept, beats and execution. I loved it. Luckily for me, there was more to come in volume 2.
Posted by pulpcitizen at 03:36