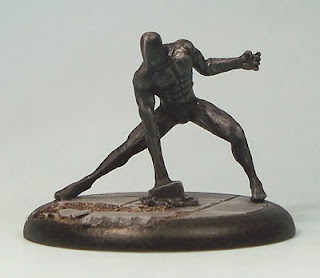 Dr. Mercury is a Heavy Metal Supreme able to shift forms and shape his body into weapons.

Sculpted by Jarek Smolka, Dr. Mercury is in some ways a 'utility' character, able to offer a variety of talents as well as crucially supporting Heavy Metal supremes through his exclusive resource. He is primarily suited to close combat or a support role, but in the latter he will use up precious Action Points. Interestingly the character was inspired by a contact known Pulp Monsters/Pulp City's mastermind and chief architect, who in turn felt that the creation known as Dr. Mercury would be a perfect fit for the game. 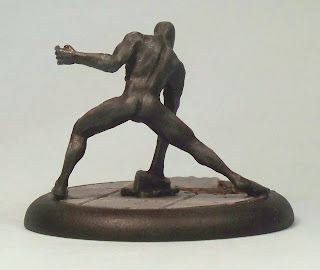 The character by virtue of his background is intended to be made of living metal. Planning for use in another game (more on that one day...), I decided to paint the first Dr. Mercury I did as a kind of 'living darkness' - well that was the intention anyway. It probably did not work quite as well as I hoped, so I will try again some day.
Posted by pulpcitizen at 10:40