Here are a couple of other minis I am planning to use in some future Pulp City games, but that I chose to base in a fairly neutral manner that should (hopefully!) fit in with the bases I have done for Pulp City without looking out of place elsewhere.

There are currently some Beta-test rules that allow players to create their own Minions, so that is what I have used to create stats for these guys (follow this link to the forum page with the current rules). The create your own rules have been nicknamed BOOM (Build Our Own Minions), the nick-naming of which I may be guilty for... 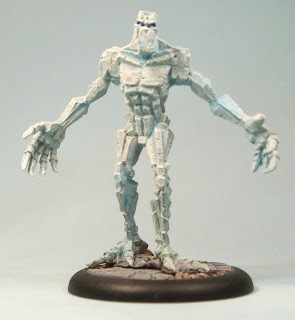 It could be a companion to a Mystery Supreme or a fiendish creation of the Mysterious Man. The model is from the Malifaux range by Wyrd Miniatures, and the painting was a quick and cheerful drybrush with minimal highlighting and small amount of wash. Not brilliant, but acceptable for the tabletop for me at any rate. 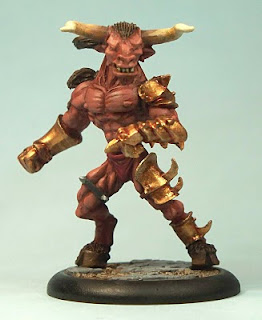 Most likely a creation of the Mysterious Man or an underling of the Forgotten (especially Hellsmith). The model is by Reaper Miniatures from their Warlord range, with the simple conversion of removing the weapon that it had. It was painted a couple of years ago and rebased when the BOOM rules emerged.
Posted by pulpcitizen at 02:40