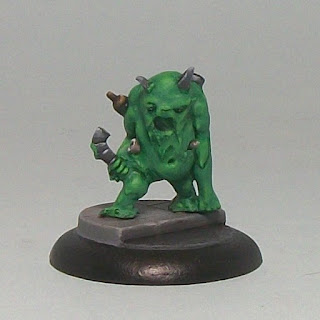 My first Pulp City mini of the year - Toxic Grimmvenger - and my first finished Pulp City mini in almost seven months. Wow - far too long (how often do I end up typing variations on those words?). However, he is the 121st Pulp City mini I have painted, so at least the total has grown. Hopefully the next few weeks will see a few more additions to the painted minis selection!

After some months of inertia a package of new stuff finally arrived with ye Citizen, and yesterday I prepped 6 Supremes and 2 Minions. Among those Supremes were 4 of the new Grimm unleashed from the Kickstarter, and I saw them as a way to 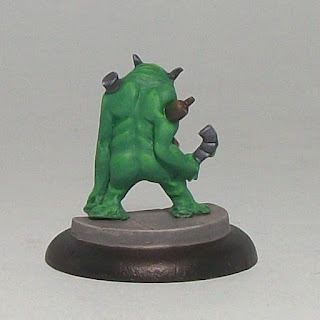 In game terms Toxic Grimmvenger is an interesting proposition; he is one of currently three Brawlers for the Grimm, and each is functionally different. Of the three, Toxic Grimmvenger is probably the hardest hitting simply because he can easily generate 3 dice, or 4 dice with TINY! in play, without considering extra dice from situational Combat Bonuses. Couple that with a range of Attacks from a cheap and basic Damaging close combat Action to a ranged option to a Damage 2 close combat Action, and he offers real threat against other Supremes, even those of Level 2 or 3.