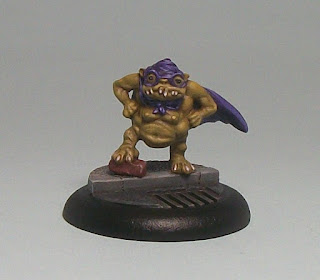 My second Pulp City mini this year! Another Grimm joins the gribbly ranks of the under-dwelling empire. Like every other Grimm, Supreme Grimm is influenced by what he saw in human popular culture, and in his case he adopted a mask and cape to accompany his Supreme powers.

This was a lovely little model to paint, as it was quick and simple which is a contrast to some other minis I have tackled this year. Being able to finish a couple of models within a few days of each other was a real pleasure. As a consequence I have more Grimm ready for painting on the horizon, so hopefully their ranks will start to fill out pretty soon. 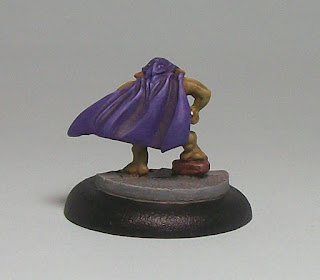 Supreme Grimm is a Speeder, and potentially a surprising one for opponents as he has an Overrun that works off his AGL Trump. He can also provide Power Up dice for an ally in BtB each Round, so he is a mix of team support, objective grabber, and attacker; he is not brilliant at any of those functions, but is a good all-rounder. He is also well worth considering in a Dark Solar all-Nature team: offering extra Power Up dice to Dark Solar, Perun or Father Oak is a frightening proposition.

In game terms Grimm are an unusual proposition. They have two available Level 3 Supremes, and all the rest, like Supreme Grimm, are Level 1. That means they are more fragile individually than the usual mix of Level 1 and Level 2 Supremes, and given they can appear in strong numbers, they can be prone to falling in groups to Rays, Pulses and Overruns. Rob and I hope to do a battle report with them later in the year - we even have a title ready!