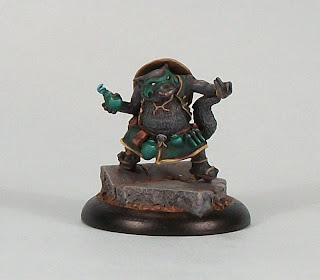 Outside of the closed ranks of the Jade Cult, Tanuki’s origin is veiled in secrecy, and even within that terrible society few know the truth. One of the Jade Cult's mysterious spirit-oni’s, Tanuki is probably the least loyal of that kind, even if ultimately he is the only one that recognizes that fact.

My third of a planned four Super-November minis, Tanuki has been a long time in coming, although not so long in painting!

I started this just after the launch of this shared challenge with Rob, and the bulk has been painted in the past few days. I found it quite an enjoyable mini to paint, with nice areas and textures to work on. That said, with my new job (I say new; been in post two months), I do not get much day-time to paint in, so Tanuki has mostly been painted at night, which has played havoc with the dark greens, so if anything looks a bit ropy, I blame the lighting! Ahem... 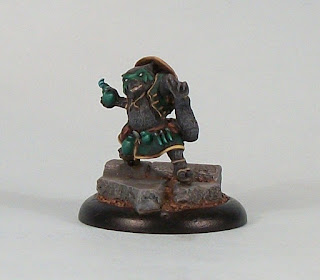 This is the first Pulp City mini for my own collection for quite some time. In game-play Tanuki is very much a Support Supreme, there to help his Team-mates through his unique Actions; he certainly has his own little niche, and is quite unlike any of the other Jade Cult.

With the Terror Cotta Warriors and Green Emperor on the horizon Jade Cult is near to be able to field a sizable Team.

I do think this is a really fun mini, and one I probably enjoyed painting and that I am happier with than any other this year.

I have veered away from my usual Villain colour motif (good old purple!), but hey, the Team is called the Jade Cult after all! 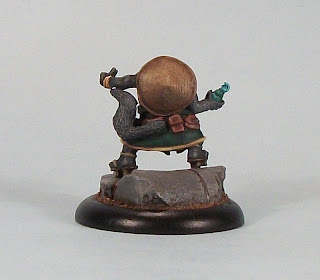 Next up for Super-November? Well that would be telling...
Posted by pulpcitizen at 12:26