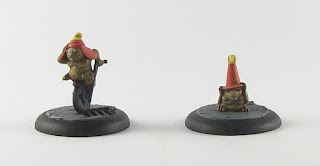 My final Grimminions are done! I started all five Grimminions at the same time, then focused on the three I thought would be easiest to finish first, with every intention of finishing the other two a week or so later. That was a couple of months ago....

Anyway, the little guy with the traffic cone on his head got some work done while waiting for paint to dry on another mini, and so made some quick progress. That just left the limited edition Kickstarter exclusive Grimminion on its mono-wheel, the most complex of the bunch due to the different 'bits' of the model, and which I finished today. That now takes me to a 'full' card of Grimminions, which can be surprisingly formidable to an unsuspecting opponent; the more there are, the higher value their key Traits of Strength, Defense and Agility become; in effect the Grimminions are treated as one model in terms of making an Attack, but with the option of which model it comes from, and as noted, with high Trait values backing it up. 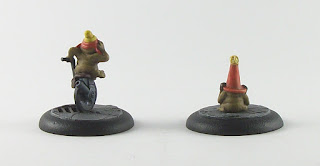 Finishing the Grimminions is pleasing both in terms of having more painted Grimm (yay!) and finishing more Minions (also yay!). This takes me to 136 painted Pulp City minis, and halfway to the modest target of 12 Pulp City minis for the year which I set at the outset. I'd like to get a couple more Powerhouses done soon, including TINY!