Unlike the public fanfare associated with the much-lauded Heavy Metal, at times of great peril the shadowy Vigilantes of pulp City will also emerge to do battel against evil threats.

Dead Eye is the greatest of their number, and a team led by him can count on an array of Supremes at its disposal. Any non-Sub-faction and non-E.T. Hero (including Hero/Villain) can be including, and thanks to all Supremes in the Team gaining Hatred it makes an ideal Team to battle against all-Necroplane or all-Ulthar Teams, and against Pulp Monsters.
At present all bar-one of the Level 1 Supremes could be used, creating a Team capable of being fielded in anything from Encounter Level 12 to 18.
Supremes pictured above:
(back row, left to right):
(middle row, left to right)
(front row, left to right)
Posted by pulpcitizen at 02:07 1 comment: 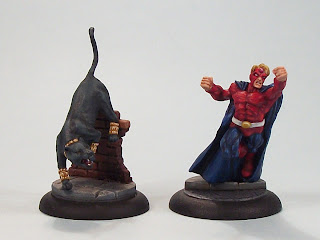 The Pulp City setting is home to a number of recognisable duos of Heroes and Villains alike. Some examples include Father Oak and Acorn; the alien-human hybrid Tritonious and Virgo; and Moonchild/Moon Coyote who each allow the other model to be used as an ally ignoring the usual Faction restriction.
Like Batman & Robin in the comics, a Super Duo is a pair of characters that may be perceived to be more than the some of their parts. These pairs of Supremes often have rules that directly reference the other member of the pair, but Super Duos are different - play them together in close proximity and they simply get better at what they do.
First up for consideration is fittingly the originally referenced Super Duo: Solar and Stalker. For a long time after Solar's release in the original Hero Starter Set we did not know anything about Stalker except that he formed a Super Duo with his feline companion, and what the benefit would be for doing so.
Super Duo works on close proximity as I have stated - it is determined by Spirit Trait in inches. For Solar and Stalker they each have spirit Trait 3, so within 3 inches of each other each adds +1 to their Agility as this is listed on their cards.
The upshot is that they become that much harder to hit with many ranged attacks when close together. For Stalker it is a free defensive boost that can also be paralleled by using his Elusive* Action to render him much more durable when needed - say when holding an objective for example. Boost that up further with buffs such as Solar's Touch of the Sun and then you have a pair of models ideal for holding out on an objective or offering area denial with added capability from their offensive Actions when needed. With the 3 inch range of the buff, they could be placed either side of an objective Token to limit access by enemy models while retaining their defensive boost.
Posted by pulpcitizen at 01:19 No comments:

I was looking back over some posts, and realised that it had been a while since I posted any month-end painting summaries. Of course that could be accounted for by the fact that I have painted so little for Pulp City in recent months...

So without further ado:

November
So 5 minis in 4 months. Last year I was aiming for around 4-5 minis per months and managed just over 4 per month on average. In this period of 4 months I managed only 5 minis in total. Yes I was painting other stuff like Zombies, but nonetheless a real loss of momentum.
That said, of the remaining minis for the range I have yet to paint there is only the following:
So suffice it to say I am looking forwards to the next releases.

Posted by pulpcitizen at 01:03 No comments: 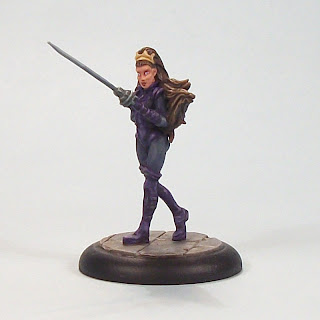 I am glad this one is done. It has been a pain in the behind for me to be sure. Firstly my planned colour scheme just did not look right, and secondly I dropped it (maybe a couple of times), which necessitated repairs to re-fixing the sword arm and the mini to the base.

I like the model, and my end result is okay, maybe, but this particular painting experience has been frustrating at times - mainly due to my own clumsiness. I really like this sculpt by James Van Schaik, but it has nonetheless been an awkward process.

Oh well, done now. The original colour scheme had been intended to be a deep purple (which I kept) contrasting with a paler lilac or similar. the colour choice was influenced by Marvel Comics' the Swordsman, a former Avenger (so a complement to the Hawkeye them for Arquero). I just could not get a satisfactory colour for the lighter tone, so ended up with the blue-grey type colour here which works better I feel. 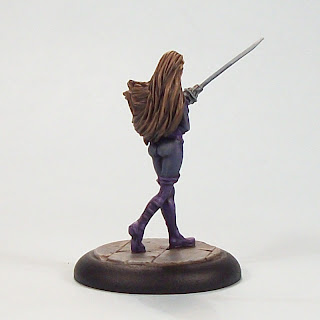 In game terms Riposte is no combat monster. Instead she is very much a finesse Supreme with Actions that benefit from considered use and planning - maximising benefits can require a little forethought and calculation by the player using her.
Posted by pulpcitizen at 04:15 No comments:

This latest 'welcome' post is to Yslaire, who I note has a interest in skirmish gaming and is thinking of trying out Pulp City - I hope you won't be disappointed in either the game or my humble little blog.

Not much more painting in recent days (although a little done with Ra'Leigh, Aquarius Warlord and Riposte), mainly due to my work schedule this week. Hopefully more at the weekend.

Returning to the initial welcome, once again thanks to Yslaire, and thanks to everyone who stops by.
Posted by pulpcitizen at 09:31 No comments: 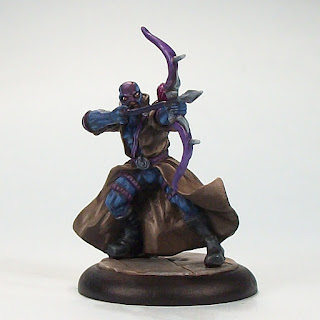 So after a painting slump lasting maybe six or seven weeks (maybe a little more?), I have finally finished something. A pleasing turn of events for me.

I loved this one from seeing the initial concept (as seen in the Pulp City Guide, p. 141), and when I got to see the green I was blown away.

It was awhile before it was then released and when I got hold of mine I was filled with enthusiasm, having a fairly clear plan for the paint schemes for Arquero and Riposte (the latter changing pretty quickly BTW), which was influenced by Marvel's Avengers (past and present) Hawkeye (Arquero, naturally) and Swordsman (Riposte, but subsequently changed). 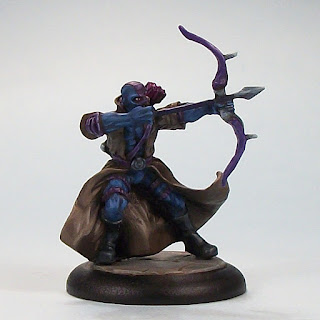 However, my original enthusiasm waned with my most recent painting slump, which in turn was precipitated by painting so many Zombies in September I think, as well as other distractions. My painting tends to go in peaks and troughs.

So after posting about my slump, that seemed enough of a kick-start to return to Arquero yesterday who had a lot of work already done, and so finishing was fairly straight-forwards.

In game terms Arquero is useful in unaligned Teams and so is a good Supreme to consider for those Level 3's that build those kind of Teams, such as Dead Eye and Mysterious Man. Being part of a Super-Duo, Arquero is certainly more effective alongside Riposte. Finally, with his Melee Shot and Defensive Fire Actions his is an adept model when it comes to covering/protecting allied models, as well as having decent Ranged Combat Actions of course. 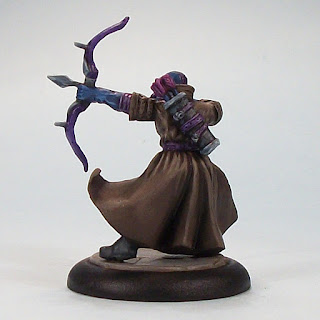 I am glad this is done - comments and criticism welcome.

I am still working at my photography, so I am fairly pleased with how sharp this one looks; still, more practice, practice and practice needed I think!
Posted by pulpcitizen at 03:15 3 comments:

Hopefully something new to photograph in the next few days (maybe tomorrow?). Finally...

... and hopefully I will be able to press on again.
Posted by pulpcitizen at 12:40 No comments:

It is 'that time' again. I get these phases when I hit a painting slump. Numerous factors have been at play: work; back-pain; lack of that feeling of inspiration; stuff in general. I think also that painting so many Zombies in September actually took away some of my enthusiasm.

I hope that something kicks me into gear again soon. I have a number of Pulp City minis (all except the Monster) in stages of base colours or even some highlighting and shading; I just need to get something finished.

So hopefully more soon. Or at least soon-ish...
Posted by pulpcitizen at 11:37 1 comment:

An account of Bruce Wayne's fictional medical history, with notes on his explanations for the same, and the inevitable allusions to possible concerns regarding his relationship with Dick Grayson. A fun read.
Posted by pulpcitizen at 11:11 No comments:

Early next year should see the introduction of new replacement Starter Sets for Pulp City.

There have been a few posts about these on the Pulp City Facebook page, so I thought I would collate the information that has been forthcoming so far here.

...new starter sets coming out early 2012. Each starter will be 3 minis strong, one for each origin, and they all will be either vanilla Heroes or vanilla Villains. Each will include a new version of one of the original Supremes. They will be a perfect Lvl 5 intro to the game. 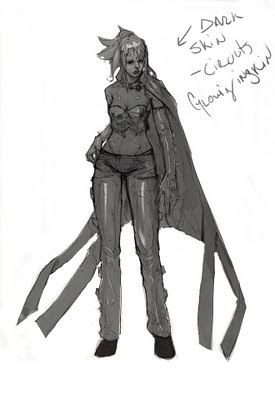 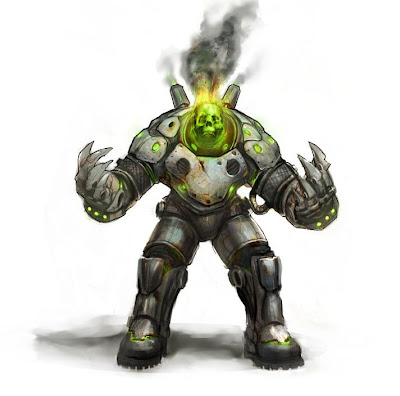 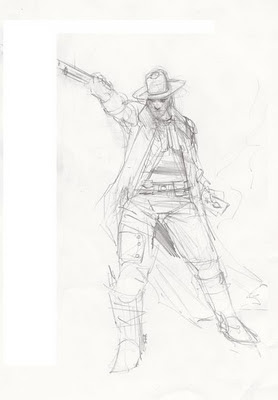 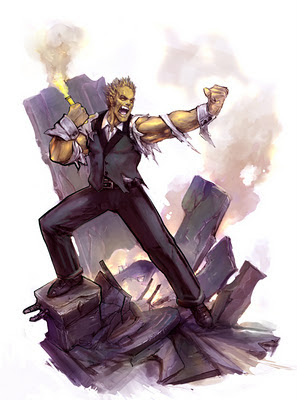 As a big Avengers fan from my earliest exposure to the team in the early 80's (which in turn imprinted some of my favourite Avengers personnel), I am very excited about the movie next year (with some reservations such as on-set stills of Cap's costume - the First Avengers one worked better, but then the non-movie stills of that were a little ropey, but I digress...).

Ahead of the movie I have watched the trailer, but on one of the fora I frequent I found this brilliantly funny lo-fi/no-budget recreation of the trailer! I wholeheartedly recommend clicking the side-by-side option (find it after clicking play, top left corner). Enjoy:

Posted by pulpcitizen at 03:35 No comments: