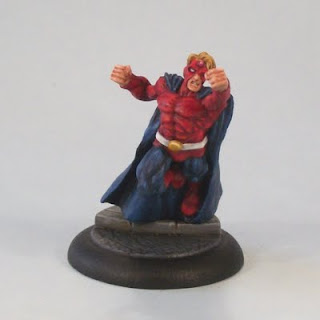 He took the mantle of Solar to wash the guilt off of his soul. Promising he’d never take another human life, Solar patrols the streets of Pulp City day and night, a loner constantly brooding over what might have been and will never be

The original 'spandex Supreme' has had a makeover (see Solar here), and what a makeover! The original divided opinion in some quarters I know, due to the cape (I have read comments elsewhere from posters who struggled with it, even though I thought it was a great solution to creating the appearance of Levitation), but I really liked the first iteration. This new one is probably even stronger in overall execution and the fact that it is single-piece makes assembly very simple. It is easy to see the evolution in the creation at the hands of a different sculptor. 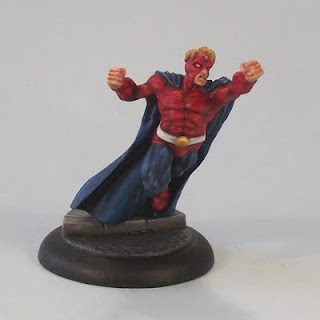 I actually finished this a lot sooner than anticipated, starting it only as an afterthought along with Sovereign (and later Perun - all with a similar root palette), so it was pleasing for me to see it finished. I elected to continue my previous Solar colour scheme this time around. I decided against trying a free-hand version of the chest emblem as my confidence to do so is not sufficient - may next time when I try a different colour scheme.

In gaming terms Level 2 Solar (Hero) has had a bit of a makeover; nothing drastic, just some tweaks to better reflect how the game works now with more than 50 Supremes available, and the fact that he should have been able to fly all along! 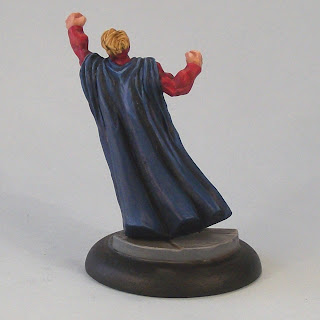 Level 3 Dark Solar is a very powerful proposition; a Hero/Villain, he unites Nature Supremes as a very formidable force. His all-Nature Team Power generates an additional Power-Up die per Round; not to be taken lightly. Just as the Level 2 Solar is a fairly formidable option even as a Level 2, so too is Dark Solar relative to his Level 3 peers, armed with some powerful Damaging Actions (Tactica here). Along with Dead Eye he may be my current favourite Level 3 available.
Posted by pulpcitizen at 02:45