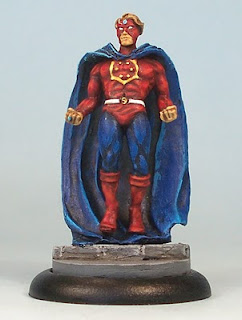 The mighty German millionaire, the spandex-clad Hero, the bearer of Ahau-Kin's tiara, the caped hunter of the Forgotten!

Solar is probably (so far) the most spandex-y of the Pulp City Supremes in the style of traditional comic book superheroes and supervillains. And I love the model all the more for that. Big cape used in a novel way in the construction and execution? What is there not to like in that. I think Jarek Smolka did an excellent job in creating the effct of a hovering hero when completing this one. Yes there is a lot that is familiar in the basic premise, but this model is no straight copy of any specific hero, rather a distillation of a lot of classic superhero tropes. 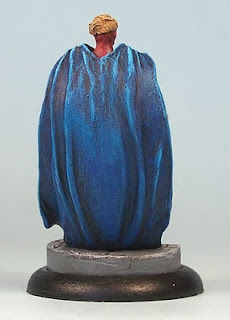 Solar is a very interesting example in the context of the development of the game and it's background. He is pretty rounded Level 2 Hero able to fight in base to base as well as being mobile and having some useful Exclusive Actions. However what I feel is most interesting is that a poll was conducted last year amongst Pulp City Forum board members. The poll was to determine which of three Supremes (Solar, Guerilla and Ace of Wraiths) would evolve into a new iteration. Solar 'won' the vote. So at some point we will see Dark Solar...