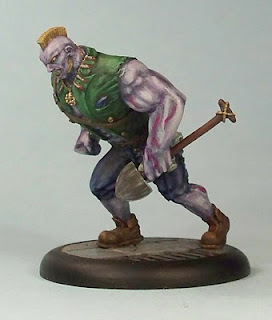 Six Feet Under never steps back. His traumatic experience in Hellrock prison stripped the remnants of his sanity.

I finished and photographed Six Feet Under (also referred to as 6FU by some players) last week, however my camera appears to have 'died' as you may have noted from recent posts. Having photographed the mini, I was not going let that deter me. I ordered a USB SD memory card reader and voila, was able to access the pictures I had taken of Six Feet Under and Tangent. 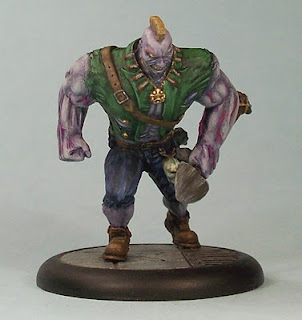 I had started Six Feet Under at the same time as Hellsmith, planning to paint and finish both together. With both being over sized I found it slow, laborious and somewhat disheartening as I didn't seem to be progressing very fast. So I put both to one side and finished Tangent instead! Then while getting towards the end of Tangent I revisited Six Feet Under and finished him within a couple of days. Following that, I started (and quickly finished this time) a second Hellsmith with a completely different paint-scheme to the (as yet) unfinished first Hellsmith. Funny how these things work, isn't it? Anyhow, I am fairly pleased with the results for Six Feet Under. The model has had a little extra minor work since the photographs, but obviously I won't be rephotographing it imminently. 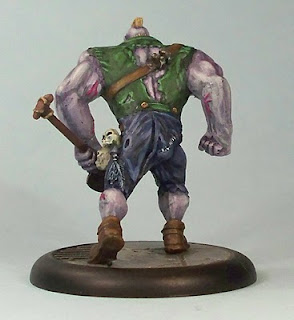 The sculpt is yet another by Jarek Smolka, who has sculpted most of my painted Pulp City minis thus far. As for gaming with Six Feet Under, well one tactic is to take him with Trail and Blood Rose and deliver 6FU as a 'melee bomb' to beat down a target. He will probably struggle to survive unsupported, but it should be brutally effective.
Posted by pulpcitizen at 04:42