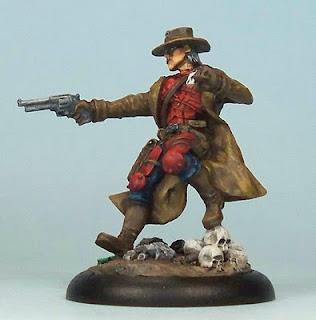 Armed with the cursed Deck of Souls and the ancient gun Hellstromm, the brooding gunslinger enters Pulp City!

Another Jarek Smolka sculpt, I really like this model. Unfortunately I have painted it on and off for months, which suggests to me that I really didn't have a strong and clear enough painting concept at the outset. A lot of decisions in the painting have been made as I have gone along, which has probably left me less than satisfied with the end result. 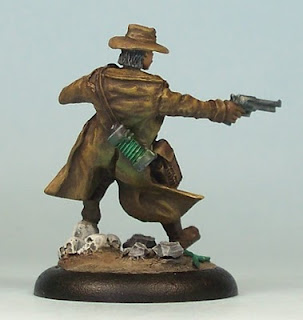 I love the background of a doomed gambler and gunslinger empowered by Hellish forces and artefacts to exact retribution on evil men. It is a classic that shares themes with many such doomed loners, I just don't feel that I managed to evoke that feel in the painting of the mini. I am vaguely satisfied with my first OSL (Object Source Lighting) attempt at the back of the mini. It is probably only faintly visible, but it is a technique I'll keep working on.

I have seen some great examples of Ace of Wraiths in recent months. It may be worth checking out the Pulp City Forums Hobby Section to have a look.
Posted by pulpcitizen at 04:18