While I seem to be without camera for the time being, we may see more non-miniatures posting for now. 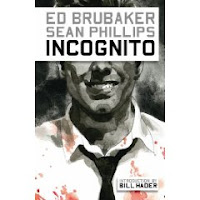 I first read Incognito (written by Ed Brubaker, drawn by Sean Phillips) last year, while it was being released in serial form by Marvel through their creator-owned imprint 'Icon' (also the home of Mark Millar and John Romita Jr.'s Kick-Ass). I really enjoyed it, so much so that I picked up the collected trade paperback edition to allow ease of re-reading.

I had read stuff by Brubaker before (like Immortal Iron Fist), but he is not a writer whose work i closely follow since he has a heavy crime-fiction focus for his comics work, and that is a genre I have never been particularly into. Similarly I have seen Sean Phillips art on a few occasions but have never been an avid fan. So it was that i was searching for something new to read that wasn't tied into the massive story lines overwhelming both DC and Marvel these days. The cover of issue #1 of Incognito grabbed me enough to try it out. And I am glad that I did.

I won't offer a detailed synopsis since I don't like having stories spoiled that way, but I will try and say what I enjoyed about Incognito. The story centres on Zack, a science-villain (love that designation) formerly known as Zack Overkill, a brutal criminal who wreaked some terror along with his twin Xander at the behest of a master criminal. The story begins with what is evidently an life devoid of any direction for Zack, and devoid of any real motivation in any direction except numbness. Zack's past catches up with him as he finally discovers a new and unanticipated direction for himself. The rest is a pretty wild ride.

Incognito is a real mash-up. It has pulp overtones (in imagery and the characters populating this skewed universe); it has hard-boiled noir and crime-genre themes; it features some visceral and violent action; it has shades of super-heroes filtered through all of the other elements. What this adds up to is a great hard-boiled story of one man's transformation. It isn't for the squeamish and the language is very coarse in places. But that for me didn't detract from the enjoyment I had from this story. Of late I have begun to want brighter, simpler superhero stories to read - at least in the DC and Marvel universes. Outside of that I am more accepting of the kind of themes that a book like Incognito features.

This isn't a story about four-colour superheroes and supervillains. Instead it is about a man caught up in the unsteady and shifting circumstances associated with science-hero and science-villain culture. Brubaker and Phillips have created a compelling and absorbing little comic book universe in this story - I look forwards to revisiting it both with this story and any follow-ups they have planned.