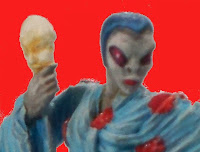 BRIEF: Last survivor of a lost other-dimensional culture; healer with the Blood Watch. Blood Rose requires careful use as her lack of defensive skills, relatively low Damage and relatively low defensive Traits (even with her Trump SPIRIT ) mean she is an easy potential target. On the plus side there should be little temptation to need or use Power-Ups, so her role is narrow meaning you can focus on Damage-dealing from the rest of the Team and are not left debating too much how to use her. Don’t be afraid to make maximum use of her AP Allowance – if you are taking Blood Rose in your Team, then it is for a very good reason, so don’t scrimp on making maximum use of her.


POWERS: Lacking Damaging Actions, Blood Rose is pure Support Supreme, focusing on deployment, healing and movement. While this may sound limiting, it arguably allows you to use other Team members a little more freely since Blood Rose offers a ‘get out of jail’ card of sorts. Of course the flipside is reduced damage dealing capacity overall.
Look to use her movement abilities early in the Encounter and probably healing more so later.

Overwhelming Mercy: very useful, since this can remove the Incapacitated Condition, a great way to return a model with Regeneration (such as Six Feet Under) back into the game. Don’t overlook the Burdened aspect, so if an Incapacitated model can be Healed with First Aid Kit instead, then that may be a worthwhile consideration if it is a safe option. Or use before the end of the Round to ensure AP for the Pool; net gain for a Level 2 is minimum 4 AP up to 6+ for Level 3 depending on who is targeted – a forward investment not to be overlooked.

Shadow Door: obviously beneficial for repositioning a friendly model, either to grab or contest an objective, or maybe to try and hold an enemy by placing a Supreme like Six Feet Under or Sgt. Bale into Base to Base, or basically overcome lack of other movement abilities. It is also expedient for a swift withdrawal if Blood Rose and a Team-mate are in danger; then I would suggest combining Shadow Door with Run* to get Blood Rose and the target as far from danger as possible.

Portal Of Thorns: possibly my favorite Action in Blood Rose’s repertoire. While Shadow Door is great for escaping Base to Base, Portal Of Thorns is more cost-effective as a simple movement of a friendly model. Movement distance can be maximized by having a healer near to Blood Rose to remove Damage points that she accrues.
Since the target model can be moved up to 10 inches without endangering Blood Rose, think about using Heroic Call (Battlefield Control) to set-up a tag team Action; reposition the target up to 10 inches away, then Activate the target to attack where you want them since a Charge* will add a further 6 inches, or most ranged attacks could be further combined with a Move*;) or set up with Trail’s A Second Ahead beforehand to respond to enemy movement through the Held Actions available. Especially useful to pick off a flanking model. The downside is that the friendly target will probably be left out of support range of your Team.
One option to consider is to use a tag team of Blood Rose and a model to carry a movable objective (Quest Plot, for example) back to safety in your deployment zone. This will require Blood Rose being within 6 inches of the objective location, meaning she will probably be taken down as a consequence, but it could offer a massive tactical advantage in doing so, so therefore worth the sacrifice; further protect the model grabbing the objective by dropping them safely behind a bodyguard such as Six feet Under.
Finally Portal Of Thorns is also handy to circumvent ‘screening’ tactics, dropping the target in the place behind the enemy screen to maximize impact.

Blood Roses Bloom: to use this effectively your Team needs to be fairly clustered; how confortable a proposition this will be will be influenced by the models you face – Tangent and Solar would be natural deterrents for example. It is going to be a very much situational Action to maximize benefit, but some subtle options may be on offer – maybe moving one of your Brawler Supremes (Six Feet Under and Sgt. Bale are good candidates) into Base to Base with a model you would like to hold in place, or at least threaten with Free Strikes. I can see little obvious advantage to moving out of Base to Base with this Action unless it is guaranteed to set-up a follow-up Action or attack.


RESOURCE: Astral Rose – very useful as it gives another heal and move option; of course it can be given to another Blood Watch Supreme to allow the same trick to be used on Blood Rose. Put a first aid Kit on another model and you have 3 ‘healers’ in your Team for maximum versatility.


SKILLS: Blood Rose’s Gate is very valuable for deploying very near to objectives, or even better tactical positions. Take an all-Blood Watch Team, and this ability gets even more potent. As an all-Blood Watch Team can cover ranged and close combat Actions, as well as some upcoming mobility with Moon Child and Loup Garou II, then it is a very good option.


WEAKNESSES: Firstly bear in mind that she is a prime target for any ‘big hitters’; models able to dish out attacks that can achieve up to 16 or more against DEFENSE or AGILITY should be in a position to take her out in one shot a lot of the time. She just isn’t designed to stand up to any kind of major punishment. Keep her out of danger. SPIRIT aside she lacks the Traits and Damage to handle any kind of sustained attack.

SYNERGIES: Any and all Blood Watch obviously, especially with her enhanced Gate for Blood Watch. Use with Androida for maximum speed and mobility. Trail makes a handy partner to deliver a ‘Supreme bomb’ (often called the Six Feet Under bomb); prime a Supreme with A Second Ahead (Trail) before launching with Portal Of Thorns into the middle of you enemy to maximize disruption. You will probably lose the Supreme you send, but it may cause a mess by doing so.
Posted by pulpcitizen at 04:52