Okay, not the most exciting minis/gaming stuff around, but I like to have nice Tokens on the gaming table. Just as I think playing a game with fully painted and based minis is more immersive than say playing with unpainted minis, nice incidental gaming pieces add something extra to me that scraps of paper or whatever other options may not. For example, in our games of Pulp City Rob and I track building damage using a mix of Gale Force 9 and Litko fire styled markers, each size representing defined amounts of damage, making it both a Damage tracker and a visual reminder that buildings are being trashed.

So on to these latest markers. The first set represents the effects markers for Lava Flow, a special Action that requires Supreme(s) with both Fire and Earth Skills to be used. Basically that only allows for Sgt. Bale and Stoner Hawk, but in time we may see more options. Lava Flow is a bonus Action accessed through the Elemental Mastery: Fire and Earth Resource. When triggered, a number of markers (the theoretical limit is the lowest AP Allowance of characters using Lava Flow) are place, which then travel away from the designated eruption point in each Round. I made enough to allow a theoretical limit of 8 Tokens and a single eruption point, even though it is unlikely more than 5 will be needed (or maybe 6 or 7 in the right circumstances). The lava markers are 'Fire & Brimstone' bases from Forgecraft Games (pack of 12). My first try at a 'lava' type effect; some practice still needed. 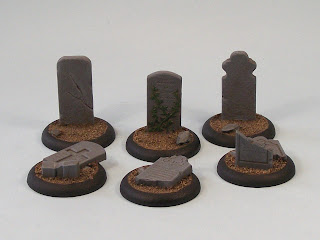 The next set of Tokens are used for a Supreme still in play test. I can't say more, but the death-theme should probably indicate what Sub-faction the model will belong to, and eagle-eyed readers may have spotted art for a likely candidate in the Pulp City Guide...

These markers were quick and cheerful to make using the new Graveyard sprue from Renedra (link). At £8 GBP for 2 sprues, the sheer number of grave markers on the sprues is amazing and should meet most needs in the 28-32 mm scale I reckon. Not the greatest painting I have done, but I was so impressed by this sprue I decided to make them very quickly (especially as I seem to be struggling with painters block again).
Posted by pulpcitizen at 06:57