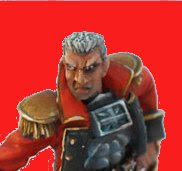 Okay, this is based on the 'beta' rules for Sovereign.

NAME: Sovereign
SUBFACTION: none
FUNCTION: Objective holder, Base to Base lockdown, Team protection

POWERS: Sovereign offers a mix of ranged and Close Combat Actions and so at first glance bears comparison to Supremes such as Solar, but due to differing skills and Action effects he will have a much different role.

Albion Mk I is a nice basic Ranged attack with an option that turns it into one of the better Rays currently available. The upshot is that this is a versatile Action capable of tagging one of even several models if used right; the Ray should be great for thinning out groups of Minions while the Projectile can be used to soften up potential targets. When considering using the Pr version against a target, bear in mind that the RNG is the same distance as a Charge* and the net AP cost is the same for the projectile as for Charge* + Strike; select Action accordingly.

Bloody Swathe is an interesting offering, and potentially a very powerful Self-Blast given that 1 Power-Up die/cost affects all targets. Just remember to hold onto the Trump Roll until it is most effective. Against more than 1 defending target with Trump DEFENSE you may be able to force your opponent to burn AP and Power-Up dice, so it is worth considering that option. Of course in doing so you have burned half of Sovereign’s AP Allowance for the round, but it can certainly be worthwhile.

British Steel*; probably my favorite of his suite of actions, British Steel* should not really see much use until mid-to-late game when Sovereign is in the best desired position. On the surface it looks like win-win with +2 to STRENGTH and DEFENSE Opposed Rolls, but don’t overlook the movement penalty; with no movement enhancing Skills or Traits, Sovereign really needs to be in the right place at the right time to make best use of this ability. Of course that can be situational, and don’t be afraid to use British Steel*with a Strike and even a Power-Up for a potential Opposed roll total of 16 – not to be sniffed at, especially if those extra 2 points could be the difference between taking a foe out and not doing so. My main use for this would be to claim an objective or even to get into Base to Base with an opponent that you do not want to see move away in the current Round without risking a free Strike at STRENGTH 7. Avoid the mistake of stacking other +2 buffs on top of British Steel* as the effects will be limited as a net effect.

Covering Fire* is probably best used early in the Round, as it needs Sovereign to have available AP to enact its benefits. It is also very useful if Sovereign can place himself within RNG of models with multiple or potential multiple Ranged attacks (Virgo, Nuclear Jones etc.) as it may force them to move to avoid being shot at for attacking the designated Supreme on Sovereign’s Team. Not an ability to use all the time, as it may simply mean that Sovereign is targeted instead with his average for a Level 2 :AGL .

SKILLS: As a passive Skill, Leave No Trace is not going to require any significant consideration except in relation to Sovereign’s Team Power.

TEAM POWER – THE DEFENDER: My view is how importantly you rank Sovereign versus the importance of a model that he may replace. A Level 1 that can keep up-table and out of danger is probably ideal fodder to be replaced. Level 2’s on the other hand probably offer their own unique strengths and so should naturally be less obvious replacement choices.

WEAKNESSES: Sovereign’s primary weakness is a mixed blessing – his Team Power makes him durable yet stops him from being healed. If you are used to relying on Blood Rose and First Aid Kits, you may need to re-think how you play when including Sovereign in your Team, and there will be temptation to have a ‘sacrificial’ Supreme to use to bring Sovereign back. Also he isn’t very mobile by himself, and becomes less so with British Steel*.

SYNERGIES: Use Blood Rose for mobility – she can drop Sovereign where needed; use with Trail or Heroic Call (Battlefield Control) Resource and allow Sovereign to drop into the right place and throw down British Steel* and maybe even Covering Fire*. Enhance that further with the Path of Destiny Resource and suddenly you have created a very tough roadblock. Dead Eye (tactica) makes a great leader at EL 12+, partially compensating Sovereign’s lack of mobility.
Posted by pulpcitizen at 00:55