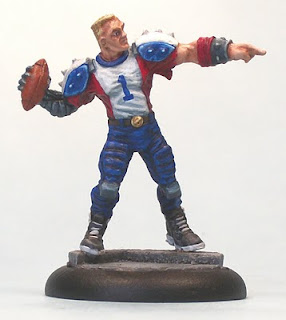 Dead Eye is the driving force behind most of the unregistered crime fighting in Pulp City.

Heavy Metal may be the media darlings of the Supreme Hero set; Blood Watch may protect the citizenry against things that lurk in the dark places; but there are many unaffiliated Heroes, and Dead Eye is pre-eminent amongst them.

This is my second attempt to photograph Dead Eye; the first pictures came out unfocused unfortuantely. 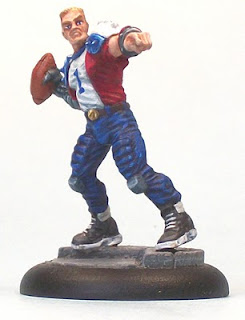 Another Pulp City mini sculpted by James van Schaik, Dead Eye is a tough Level 3 Supreme who comes in a pack with the Vigilantes. Originally I intended to paint him in the colours of my old American Football team, the Chester Romans, and give him my old number (22 - I played corner back), but that would have been an 'ineligible number' for a quarterback, so I settled for number 1 for two reasons: 1) painting one freehand number twice is easier than painting 2! 2) his number reflects that he is the daddy. The colours were changed to simply try and tie him in with the Vigilantes, so in all it made sense to follow a US-flag themed colour scheme. 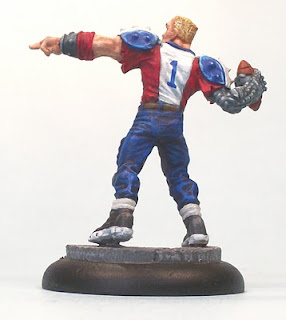 Playing him recently showed that in-game as a character he offers some finesse as well as a heck of a lot of durability and stopping power: in other words he was great fun to use.
Posted by pulpcitizen at 09:16