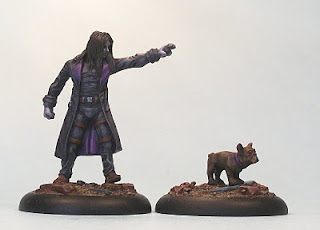 I really enjoyed painting Sanguine and Draku - opting for simple colour schemes (including the flashes of purple to tie them in with many of my other Villains); the net result was that they were painted pretty quickly having obtained them from Maciej at Salute 2010. 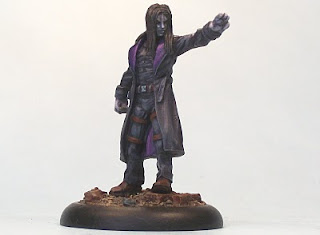 Sanguine offers quite a few team-building options: he can be fielded as either level 1 or Level 2 (and the Level 1 option can potentially upgrade mid-game!), and he has the Necroplane allegiance, which he can drop thanks to the nifty new Freelancer skill. Basically that means he can work in either currently available level 3-led Villain sub faction - unaligned (Mysterious Man) or Necroplane (Dr. Tenebrous). 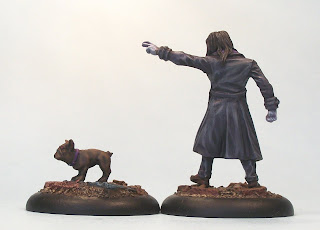 The minis are sculpted by James van Schaik, and I think he did a superb job on both. The posing is really suitable for a vampire, and the costume has arguable nods to comic-book characters like the Crow. James has sculpted a lot of the line and I think his work has been of a superb standard. 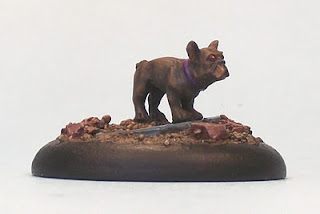 Draku offers a Minion that can hang around the game with decent HP (for a Minion) as well as having HP recovery, and to cap it all, if he is taken out, Sanguine gets mad and adds a bonus to all of his Action Rolls. Add to that that I think the model is incredibly cute, and perhaps best of all is that it is modeled on and named for the dog belonging to Maciej, the game's originator.
I believe the art on his Minion card is taken from a picture of the real-life Draku.

As a Pulp City SE update, Sanguine is a Support Supreme and Draku is a Tank Minion; a great little combination.
Posted by pulpcitizen at 10:25