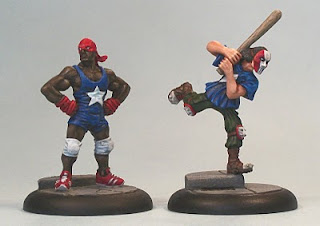 With the most recent shocking Supreme-caused crimes, citizens of Pulp City look up to the greatest heroes and take the justice in their own hands.

Sculpted by Wojtek Flis, the Vigilantes are Level 2 Hero Minions who come with Dead Eye. They are not exclusive to Dead Eye, but become more potent when fielded alongside that particular hero of Pulp City - becoming Level 1 Supremes, which don't count towards the number of Supremes selected! Instead even with dead Eye they are purchased as Resources. 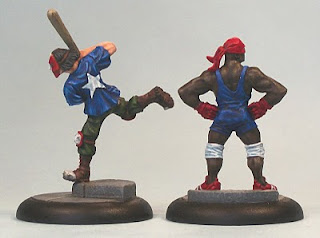 I had my first games with them yesterday and found them to be fun and effective - not game winners, but a nice addition to the range of Resource options.

The minis were painted along with Dead Eye to give a cohesive feel, hopefully making them look like a combined 'unit' as may be the case in some other games.

Originally I had a different colour scheme in mind for Dead Eye, but when I settled on the US-patriot theme for the Vigilantes his colour scheme changed to something resembling his 'official' scheme to fit more nicely with them. I am probably most pleased with the wood-grain effect on the baseball bat - not too readily visible here (however try clicking on the top image for a larger image view), but it is there I assure you!
Posted by pulpcitizen at 05:55