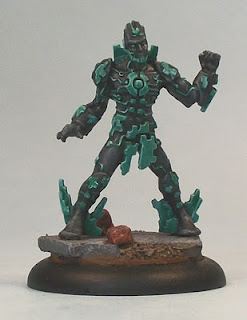 Vector used to be human, one of New Port's many low lives until the job that changed his life. A mysterious contractor paid him for stealing a bit of the C.O.R.E.'s code. Even though he succeeded against all odds, Heavy Metal leader's programming was so powerful that it morphed the thug into what is now known as Vector.

An unaligned Hero/Villain, Vector can pretty much fit into any force, and has a strong argument for inclusion in unaligned teams led by Dead Eye and/or Mysterious Man.

I played my first game with him today and he was great fun to use as he has some funky rules thanks to his exclusive resource (Pixels - the only free resource in the game so far). 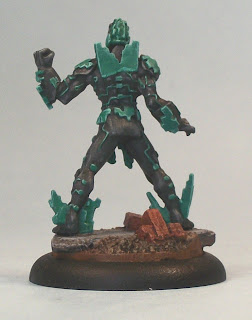 The paint scheme was a simple one, the two-colour palette influenced by the Matrix. Pulp City may be a game set in the 1980's, but the films had such a great use of colour around the scenes within the Matrix that it was an obvious if not wholly direct influence for me. I started and finished him yesterday - probably the quickest turnaround since I painted Xenobi.
Posted by pulpcitizen at 09:40