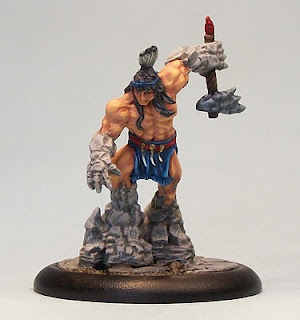 Stoner Hawk's powers come from communion with the Earth, as he is able to call on the powers of stone and shape it in different forms and reinforce his body with its durability. His skin becomes covered with the sandstone and his hands turn into deadly weapons. There is a peril, though, as in the stone dwell all sorts of malicious spirits that beg him to stay inside and lull him into the sleep that never ends: the stoner slumber.

I seem to be on a run of finishing painting James van Schaik sculpts recently - no bad thing, because as I have said previously, he is among my favourites.

Stoner Hawk was a model I was a little wary of painting at first. Nothing to do with the quality of the sculpting, but instead that visually he didn't fit anything terribly familiar. 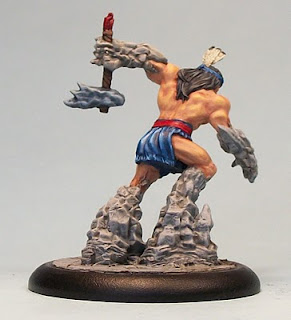 Take the Mysterious Man mini for example; even though he is a Villain, the hood and coat evokes Bruce Willis' character from the movie Unbreakable. So the obvious route is to paint that coat green (I didn't of course, but there were very specific reasons for not doing so). With the 'spandex-y' models in the range (Solar, Nuclear Jones, Harrier, Sister Bedlam etc), well the wealth of inspirations is near limitless for a comics geek like me. For a model like this, even though there is an 'studio' version painted up, until I could get my head around what I was going to do I was a bit stuck.

I settled on the grey stone rather than sandstone (from the background) simply to better fit the basing I have been doing. The red and the blue was to tie into the main colour themes of my Heroes (believe it or not, I do plan these things!), and after I realised those two choices were made, then things were clearer and it was quite quick to get painted. I just need to work on some rock formation markers to match the model.
Posted by pulpcitizen at 07:42