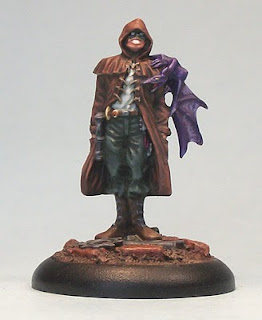 Being bad is good. Being good is bad.

Another James van Schaik sculpt, the simplicity of the Mysterious Man model belies that he is a very potent character in the game. One of only a handful of Level 3 Supremes, Mysterious Man is the first of these I have completed (I am working on Dead Eye and his Vigilante Minions right now). Just as Level 2's are noticeably more potent than Level 1's, so Level 3's are more potent than Level 2's; in addition all Level 3's offer some team-based bonuses depending on what other models comprise the team. 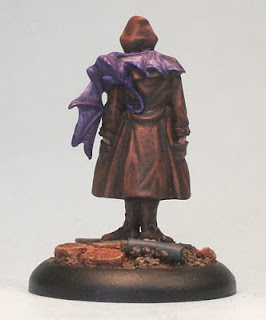 I am trying to tie my Villains more and more together visually. To that end I have settled on trying to work some purple in to their colour schemes where possible. I knew straight off that Terrordon X (the flying dino-thing on his shoulder) would be purple - inspired by a character from a certain marvelous comic book stable. With that in mind I didn't think a green coat would work (the 'official' Pulp City version is in green), so that had to be brown. I liked the idea of using greens and browns and so the rest of the palette stemmed from there. All because of the first decision. One of the few times the planning and execution went fairly closely together in my painting.
Posted by pulpcitizen at 07:23