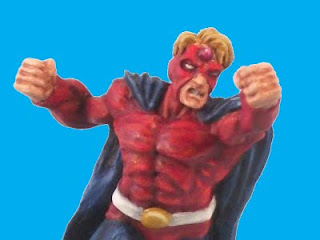 BRIEF: The evolution of Solar. As a continuation of his lesser form, Dark Solar offers improved (now tremendous) Close Combat and Ranged attacks and so works well as a center table beat-stick. Flight 5 adds mobility, and means that on land or in the air he is a combat big gun almost without peer. Finally, his inclusion adds real power(up) potential to a well-selected Team.

POWERS: Dark Solar’s Actions are primarily 3 Damage dealing Actions and 1 buff/de-buff Action. This gears him to being used aggressively and with moderately-decent defensive Traits and 19 Damage means he isn’t invulnerable.

At 2 AP Sun Ray is a nice basic Ranged Attack. Note that the Dark Solar version is better than the basic Solar iteration. In addition it can be used again if the target is Incapacitated or Eliminated. I would argue that lacking Defensive Traits and generating those extra Power-Up dice (see Team Power below), then do some math. Unless a target has so few Damage remaining that a Power-Up is unnecessary then I would argue to always use a Power-Up, especially if this is used with a lot of Dark Solar’s AP Allowance remaining (unless planning to use Night Sun in this Round).

Rip is a great Close Combat Action in my view, circumventing the benefits of Spectral while de-buffing the target and throwing in Aftershocks for good measure. While not quite as strong in STRENGTH Trait as Dark Solar’s ENERGY Actions, don’t forget that if he is Up, Up and Away a Charge* bonus can be stacked with Flight benefits and Power-Up for a pretty devastating attack (up to 17 total result). Consider setting up a target with Tritonious’ (Charge*+) Strike + Triton’s Strike, then in a later Activation Ebb Flow* (especially against Supremes relying on STRENGTH for many of their Actions). This sets up a situation where the target can’t use STRENGTH Actions but can be Damaged by Rip. Think about that kind of combination against Supremes like Hellsmith, Six Feet Under, Chimp Chi, Silverager with Rage Points, Father Oak, and Taurus etc.; basically models lacking DEFENSE Trump. Don’t overlook the opportunity to follow up Rip with Strikes from Dark Solar against the same target as they will be at -1 DEFENSE; basically a net Damage bonus of +1 for ‘free’. And finally Rip is ideal for hunting down Spectral Ace of Wraiths or Seabolt.

Face of the Sun is a better version of Solar’s Touch of the Sun. It is going to be a very situational bonus. If you have a couple or more Nature Supremes within RNG, then it should be cost-effective (Stalker should be within RNG most of the time). But using it will limit your attack Actions of course. I would suggest that the de-buff aspect against enemy skills (Blend, Gaia’s Enemy and Deflect) is a handy bonus, but won’t often be a key aim with this ability unless it looks like Dark Solar will be surrounded by suitable imminent attackers. Since Blend only applies against Ranged attacks, I think at 2 AP the de-buff aspect should mainly be viewed as an added benefit only, not as primary aim.

Night Sun; more targeted than Solar’s Sun Strikes, this is much more geared towards disruption. At 4 AP (plus Power-Up costs) the ideal primary targets probably have lower non-Trump AGILITY than Dark Solar’s ENERGY , so for main targets consider avoiding models not fitting this parameter or those lacking decent STRENGTH , and especially Supremes like Iron Train who will benefit from decent AGILITY equivalent due to Armored. Ideal primary targets should be already low on Damage and such models would include Supremes such as Giant Hadron, Hellsmith, Six Feet Under, enemy Solar, Dead Eye, Father Oak, Francis Gator, Rook, Taurus, Stormblades, and Aquarius. Of course a cluster of such targets is even better…

SKILLS: Always look to use Flight effectively - even at altitude 1 Dark Solar will be STRENGTH 7, DEFENSE 7 and AGILITY 6 and will still be able to use Close Combat Actions. Altitude 2 or more can be used fairly freely since if in Base to Base he will drop to altitude 1 anyway if using a Close Combat Action, but altitude 4 or 5 will take Dark Solar and Stalker away from being able to use Super Duo. Think of Flight 5 as a defense against high-power RNG 4 or less Actions or to avoid powerful fliers like Supreme Zed locking Dark Solar down for a Round or more. At altitude 1, Dark Solar will still benefit from Super Duo buff to AGILITY thus offering improved survivability against most ENERGY attacks as well as that small handful of Supremes using AGILITY vs. AGILITY for Close Combat Actions.

TEAM POWER – DAY & NIGHT: This needs to be declared at the beginning of each Round; remember to do this as it offers free benefits. In the early Rounds or against a Team with a lot of ENERGY based Actions I tend to favor Day, but as enemies start to run low on Damage, then Night comes into its own.

TEAM POWER – DARK SOLSTICE: There is simply no good reason not to take an all-Nature Team if using Dark Solar. Heroes and Villains offer good line-ups and this benefit should last most of the game. Enough said.

WEAKNESSES: Firstly even though as a Level 3 and he has good Traits, he is currently the L3 most vulnerable to ‘control’ Actions such as read Minds (Trail), Mind Grip (Gemini Y) and Fangs (Sanguine [night]). Secondly he has no defensive Trump Traits, so with concerted effort he can be worn down with no Power-Up counter to attacking Power-Ups and Trump Rolls. Don’t forget to mitigate this through Up, Up and Away and Super Duo.

SYNERGIES/RESOURCES: Stalker is pretty much a must as either Hero or Villain. Don’t leave home without Ahau-Kin’s Tiara. As for other line-up options? Think about Stoner Hawk – if within 2 inches Dark Solar can benefit from Redemption while offering a buff through Face of the Sun, massively increasing Dark Solar’s survivability (although opening up exposure to Self-Blasts, Blasts, Rays and similar Actions).
Father Oak’s Earth's Renewal offers a natural (no pun intended!) synergy with a Dark Solar/Stalker/Stoner Hawk combo, which then lends to inclusion of Acorn. On the Villain side the Ulthar Team offers some interesting options to fill out a Team with Taurus, Stormblades, and Gemini X and Gemini Y covering the roles of Brawler, Blaster and Support between them. Lastly don’t overlook Guerilla and Le Murtiple. Guerilla offers a similar Brawler-Blaster combo, thus adding some real firepower that can be buffed by Face of the Sun.
Posted by pulpcitizen at 02:28