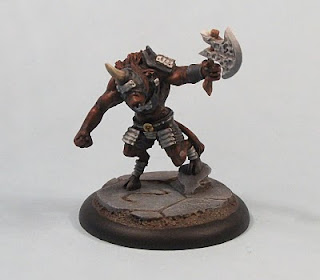 Gorgoroth, Taurus Captain, by Israel Gonzalez Mojarro (who also sculpted some of the other Ulthar) if the fourth of this growing Extra-Terrestrial Team that I have finished.

Initially I had tried to tie in the mini with the other Ulthar by attempting a very dark purple (near to black) hue on the fabric, but that looked rubbish, so I settled for a straight 'black' look. I have been using a red and purple colour theme, as well as the matching skin tone, on my Ulthar minis, and wanted that reflected in Gorgoroth, even though he is of a different species. It didn't work out so I may have another crack at it further down the line. In the mean-time he looks okay with the other Ulthar, so no rush to do another yet. 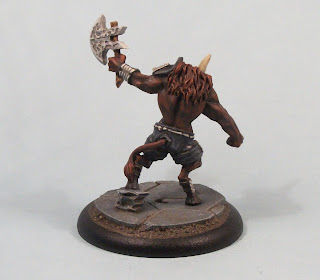 I mention 'okay' because that is my general feeling about the results. I like the mini, I think it is nicely sculpted and fitting in what it represents. I like my choice of basing, I just wish I had done a better job with the execution of the paint-job. It isn't terrible, but it is not very exciting either. Couple that with the dissatisfying way the metallic bits turned out, and I simply wish it was 'better'.

In game terms this guy is pretty tough; not so much due to his Traits, but based on a combination of Invincible 2 (reduce all Damage by 2) and 16 Damage. Thanks to needing to scent his prey (Gorgoroth is sightless), he is a little trickier to use than most bruising/brick types, but has some excellent Damaging Actions.
Posted by pulpcitizen at 09:21