A true master of the art of combat, Stormblades, Libra Sensei is another of the Ulthar minis. Although not yet on general release, some were available at Gencon in the US in August, and the web store had some available as well.

Stormblades, Libra Sensei is a Level 2 Supreme, and like most of the Ulthar so far is Nature origin, which adds a new dimension to Team-building as so few Nature Supremes were available, relatively speaking. 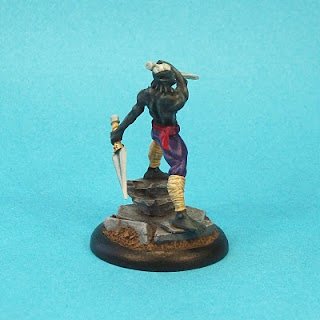 Observant readers may notice that the colour palettes of both Stormblades and Dr. Tenebrous are very similar, which was due to painting them roughly concurrently, although Stormblades was finished first. I'll be using the same skin colour across most of my Ulthar, except maybe Virgo (sine she is a renegade it will help differentiate her). And the purple and red motif will be used on my other Ulthar minis as it has been here and on Gemini X and Gemini Y, but likely not non-Ulthar species within the Ulthar Sub-faction (for example the Taurus model). 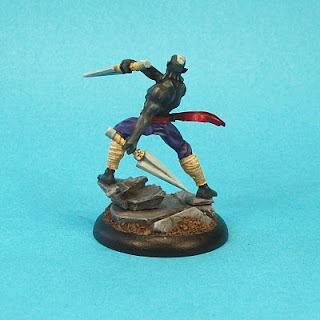 With his mix of Skills and Exclusive Actions, Stormblades is not only pretty mobile, but he has various options to close on his enemies as will as dish out some major Damage in Base to Base.
Posted by pulpcitizen at 03:23