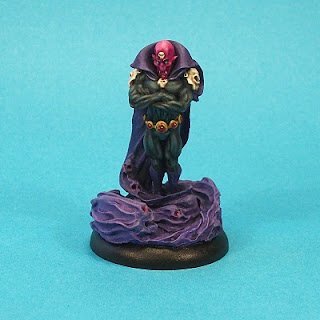 The dark tentacles of Tenebrous' agenda reach beyond Necroplane and its schemes. If the Supremes were ever aware of whom his contacts are among the Supremes and politicians on Earth, they would be afraid to ever fall asleep.

One of my two WAMP entries, Dr. Tenebrous has been in my 'to-do' pile for quite some time. Of course, when one paints at the speed of a comatose snail, that sense of 'some time' is kind of relative.

The mini was sculpted by Paul Muller and has a great spandex villain look in my mind; he has a design that would not look out of place as a threat to the Avengers or the JLA. The base is from the Maxmini range for Pulp City - it is actually the Ace of Wraiths base, but since it so closely echoed the swirling cape effect on Dr. Tenebrous it seemed a perfect choice to me. 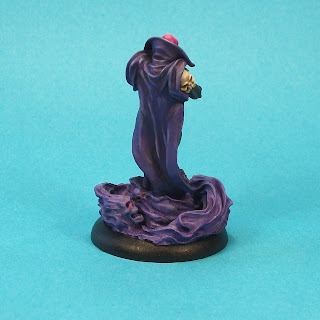 Dr. Tenebrous is the big bad leader of the Necroplane Sub-faction. The Supremes of the Necroplane are determined to steal away life force from the Earthly plane for their own nefarious ends, and that is just the kind of thing Tenbrous specialises in. Like any Level 3 Supreme he is formidable enough, but what he does is add some buffs for Necroplane minis, as well as allowing the Necroplane to incorporate Forgotten allies as though they were Necroplane themselves - when more Forgotten appear this will give a very wide array of options for players wanting to focus on these deathly invaders, let alone future possibilities for Necroplane Supremes. 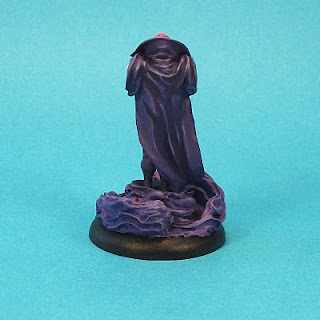 I don't quite know why it took so long for me to start this mini, but I painted it fairly quickly by my standards, and I am reasonably pleased with the results - although the gems are not great, that is an area that I need to practice on. The colour scheme uses a very similar palette to the one I used for my other entry - natural as they were painted at roughly the same time. It is a colour scheme I am pretty happy with and that I think works quite well.
Posted by pulpcitizen at 11:13