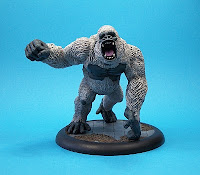 Finally (mostly) finished this for gaming today, including touching up the main repairs. I am quite pleased with how it turned out, and how quickly I finished it.

It certainly isn't the best paint-job ever, but it is satisfactory for me for gaming with. So without further ado...the Mighty Silver Ape! 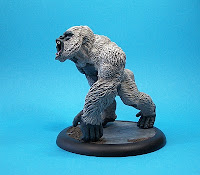 The mini (LOL!) is Kabaka K'Wana from Reaper's P-65 range, and as mentioned in previous posts is a big mass o' metal. The original plan had been to do a King Kong-styled dark brown/near-black colour scheme, but I thought there are probably tons of those. So then I thought about Silverager who I painted recently, and thought that colour scheme might be a good template. The is texture is deeper on the bigger apes fur, so they inevitably have a different 'look', but it gave me a useful starting point. 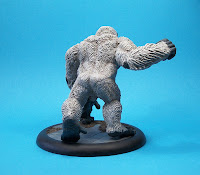 The base was an 80 mm recessed blank from Fenris Games. The texturing was sand for the gravel, and plastic card cut into strips and scored for the paving stones.

I went for a fairly utilitarian basing that hopefully would look okay alongside my Pulp City minis, but would allow the model to do double duty in all sorts of games and genres, including fantasy settings etc. 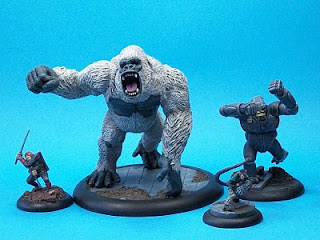 A comparison shot with some apes and monkeys from ARC just to get a sense of scale and size of the mini - it is truly a Beast!
Posted by pulpcitizen at 11:20