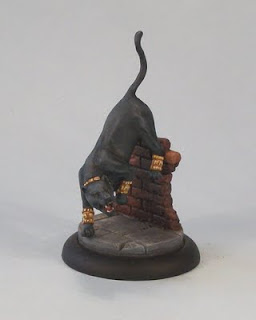 Recently Solar and his only long time companion, Stalker, are on the heels of the cultists that help Stygian to wake up the Forgotten.

A long time coming this one; the arrival of Stalker was heralded with the original appearance of Solar, both in his background and his rules. So when I was able to get my hands on one, I wanted to paint it straight-away, especially as Solar has been one of my favourite Supremes.

I painted this mini and another (to be seen very soon...) at the same time to try a slightly different approach to my normal 'black' technique, and I was quite pleased with the results, even if the photograph does not show the mini as well as I would like. 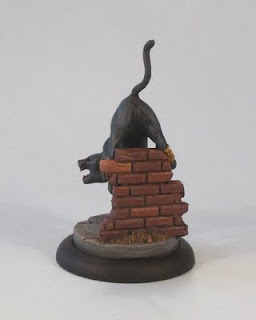 The 'new' technique involved using a dark blue-green as base colour rather than dark grey that I usually choose. That was highlighted up by mixing in greys and shaded with black and brown washes.

I enjoyed painting stalker and look forwards to getting him into a battle report sooner rather than later. It was nice to get some minis finished this week, so the next few days should see some more posts.
Posted by pulpcitizen at 09:56