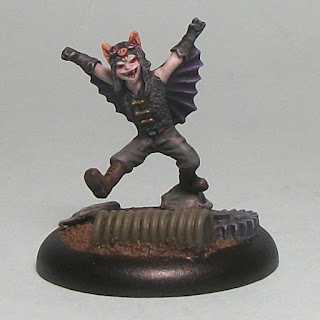 The latest addition to my Pulp City Supremes, Youngblood is the 127th mini I have painted from the range for my collection, and a pleasing addition for me, especially as it has been 4 years since I last added to the Blood Watch!

After finishing M.O.D., Amok and the selection of new Grimm before them, it has been nice to get a little renewed momentum for additions to a few different Factions.

Youngblood is a vampire child taken in to the Blood Watch fold. The Team has helped restrain the darker urges he experiences due to the power that lies within him, but even then they are not totally sure if he will stay on the side of good.

I really liked this concept as soon as I saw it, another great idea from Melvin. Part of the problem for us is ensuring that we can translate new concepts to sufficient sales to justify making minis from them all, which was part of the major reason why the first Kickstarter was so beneficial to a small company like Pulp Monsters as it gave us the opportunity to grow the range significantly. 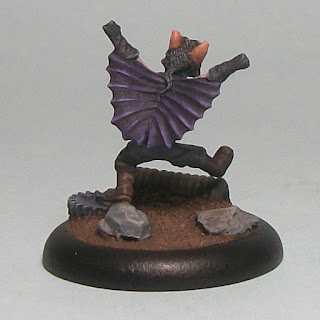 In game terms, Youngblood is an interesting proposition. Like many other Level 1 Supremes he can be taken out by overwhelming Attacks, yet he has a couple of ways of Self/Healing, which opens up the possibility of increased durability, especially coupled with him having Stealth, Flight and a Self/Defend buff. He is an Infiltrator, and one that you can dump into an awkward position, knowing he can generate a few defensive dice and recover small amounts of Damage. Add in his ability to control Enemy Minions and he can offer some disruption to an opponent, while only using up one of your Team Levels.