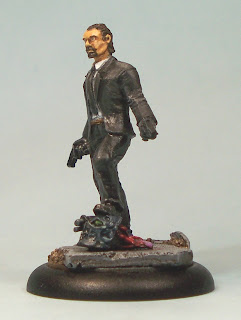 If Danny Ortega is to be called ever a victim, he is a victim of fashion and trends.

One of the earliest Pulp City sculpts, the Gentleman is available in two versions: this two-gun version and a sniper re-sculpt. 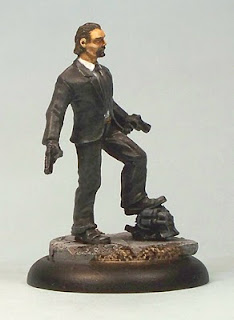 The Gentleman offers good fire support but cannot stand up to concerted attack. He benefits from two very useful skills - Greed (allowing him to be used by Hero teams; and pretty cheap to do so in my view) and Merc/Mercenary (which means he counts as being of the majority Allegiance represented in the team with all of the attendant bonuses; great for building teams that can exploit Allegiance-related buffs and bonuses). 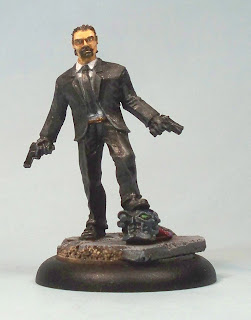 The inspiration for the colour scheme was the 'Tarantino' gangster look from Resevoir Dogs and Pulp Fiction, using dark greys and GW Badab Black washes. I have started one sniper in a cream suit as contrast and will probbaly do a second sniper to match this first Gentleman. The head beneath his foot I have assumed to be something Ulthar-related.

I plan to use the two-gun version as the basis for a conversion alter this year.
Posted by pulpcitizen at 04:52