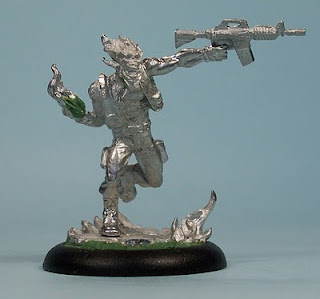 I had planned to assemble this conversion piecemeal, to do something when I didn't feel up to painting. Of course no plan survives contact with the enemy, or so they say*. In other words I built this in just an hour or so. So no time-filler on the painting challenge at this time, then.

At this stage some more green-stuffing is needed to fill a couple of gaps and build a finger on the M4 trigger. Overall I am happy with the basic construction. I could have tried to reposition the gun arm, but that would have been both tricky and would possibly have switched focus to the gun more than the flaming hand or skull. 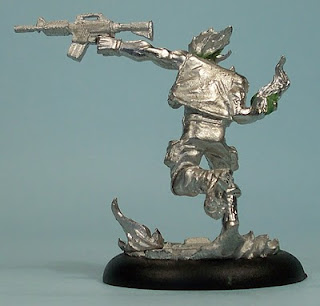 I'll try and log the progress on this model as I finish various major stages. Next up is waiting for the weather to warm up enough to spray undercoat the model.

No battle plan ever survives contact with the enemy.

And they was he, Field-Marshal Helmuth Karl Bernhard Graf von Moltke, also known as Moltke the Elder. Note that Graf is a title, not a name. A seemingly pragmatic strategist and theoretician, von Moltke postulated that only the beginning of a military operation was plannable. Wise man, methinks.
Posted by pulpcitizen at 00:39